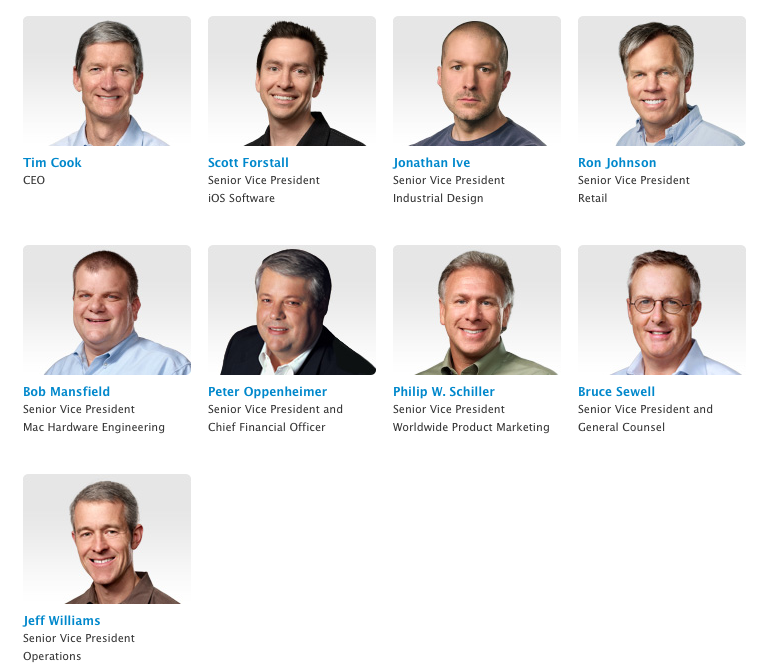 In light of today’s shakeups, Apple has posted a revised organization chart on its website. The chart lists the newly minted CEO Tim Cook, as well as the other executive staff. It also shows Jobs’ new position as Chairman of the Board and Cook’s new Board seat as well.

Tim Cook is the CEO of Apple and serves on its Board of Directors.

Before being named CEO in August 2011, Tim was Apple’s Chief Operating Officer and was responsible for all of the company’s worldwide sales and operations, including end-to-end management of Apple’s supply chain, sales activities, and service and support in all markets and countries. He also headed Apple’s Macintosh division and played a key role in the continued development of strategic reseller and supplier relationships, ensuring flexibility in response to an increasingly demanding marketplace.

Notable in the bottom row is Cook’s likely successor as COO, Jeff Williams. Still present in the top row is the soon-to-be-departed Ron Johnson, Apple’s head of retail who is leaving for JC Penny. I have to admit that It’s an odd sight without Job’s familiar face gracing it.


Our Coverage:
As it Happened | Steve Jobs’ Resignation Letter |
Apple Fans’ Predictions | Who is CEO Tim Cook? |
Why Apple will continue to dominate |
Woz On Jobs: Greatest Leader Of Our Time |
Steve Jobs: 35 years in technology |
Jobs will remain involved | Apple’s CEOs: From 1977 to 2011 |
A front row seat to Steve Jobs’ career, by Robert Scoble.

Read next: Tim Cook is now Apple's left brain, but who will be its right?