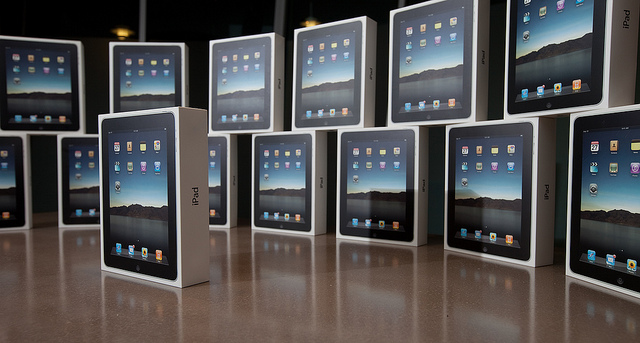 Apple’s dominance of the worldwide tablet market may be driven by its focus on North American and European markets but despite its strong presence and high tablet adoption in some European countries, Apple’s hold on the continent is open to disruption, a new report by technology and market research firm Forrester suggests.

In Europe, Apple has a varied retail presence; the UK plays host to 30 of Europe’s 52 Apple Stores, whilst it doesn’t have physical stores in Scandinavia, Austria, Luxembourg, The Netherlands, Portugal or Belgium, as the Cupertino-based company maintains an online retail presence for consumers to order Apple products in those countries.

It’s a stark contrast to the U.S, where Apple has opened 238 retail stores in the country – helping the company to become the fastest growing major U.S retailer based on sales growth.

Forrester’s Sarah Rotman Epps believes this is because Apple has no strong competition in North America while in Europe, rival devices from Asus, Samsung, Motorola and other vendors fragment the market. In terms of competition, price is seen as the biggest barrier to entry in the European market as non-iPad competitors cannot justify the price of their devices when compared to Apple’s iPad tablet device.

At least one in every ten adults in France, the UK, Italy, Spain and Germany stated that they were interested in buying a tablet, despite not owning one.

In France, only 2% of adults own a tablet, yet 10% of admit that they would consider buying one, suggesting that whilst Apple operating a bricks and mortar and online retail presence in the country, French consumers could be tempted by an alternative tablet product.

Consumers in the UK and Germany maintain the same pattern, with markets showing low adoption rates but high levels of interested tablet buyers. It would suggest that Apple, with its iPad and iPad 2 tablets already available to consumers, hasn’t appealed to a larger demographic in these countries, providing opportunities for rival manufacturers to disrupt the market.

So, who will be able to disrupt the market? Rottman Epps tells us that in Europe, smaller Asian vendors have the opportunity to eat into Apple’s market lead, offering low-cost tablets that deliver in terms of hardware quality and design quality. Samsung, HTC and other manufacturers have launched their own tablets with mixed results, but with similar (and in some cases higher) price points to Apple’s tablet device, consumers have opted to buy the market-leading iPad instead.

Read next: Apple fires back at Lodsys, insists on intervening on behalf of developers