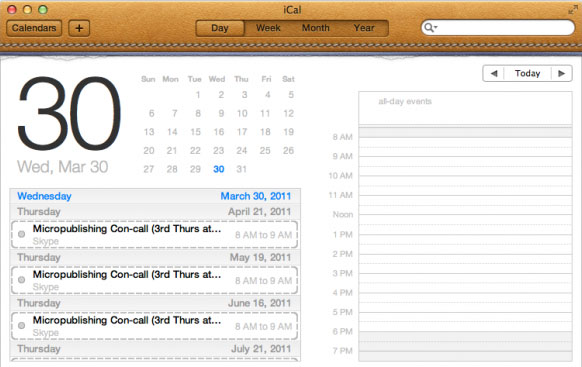 The latest OS X Lion developer preview has revealed a visual overhaul of iCal that resembles the iPad app’s look and feel and changes to iChat’s handling of multiple accounts.

Apple has said that OS X Lion is about bringing the lessons Apple learned from developing the iPad back to the Mac, particularly with features such as Launchpad that’s much like the iOS home screen.

But I certainly didn’t expect Apple to take it to such an extreme, drastically changing the aesthetic the company has developed for OS X over the years. While much of the interface is similar, we’re bound to see more big changes in core apps as development continues.

The developer preview has only been out just long enough for some users to download and install it, so we’ll keep you posted as we hear more.

Read next: China Mobile to release its own mobile browser