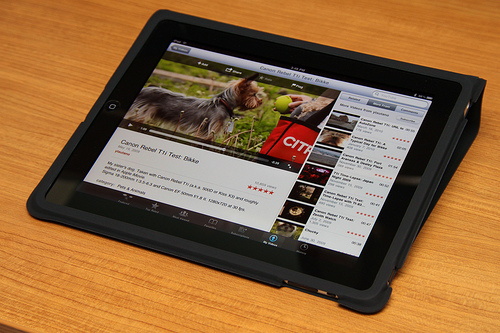 PatentlyApple is reporting that Apple has filed 45 iPad UI design patents with the European Patent and Trademark Office.

The move is almost certainly aimed at protecting its user interface from being copied by rival manufacturers and mobile operating system developers as the tablet market continues to boom.

Strangely, the designs were added to the European database this month, despite being dated back to July 27 2010, whether this was a conscious decision on Apple’s part or it had run into some problems with the Trademark Office is unknown.

The design patents include the iPad’s virtual keyboard, iPhoto-stacks, its calendar, mail and iPad homepage are all included in the filing. The shelving in iBook’s gets a mention, even “Slide To Open” is listed.

Google, seen by many to be the only viable alternative to Apple’s iOS with its Android OS, recently unveiled its Honeycomb operating system, software that will be powering many of the new tablet devices on show at this years CES Conference in Las Vegas. The search giant partnered with Motorola to unveil what will be the world’s first Honeycomb tablet, the Motorola Xoom, launching in the first quarter of 2011.

Being first to market with a credible tablet offering, Apple is definitely looking at protecting its innovations. Google has redesigned its interface, leading it away from its traditional smartphone design but but there will always be similarities between the two operating systems.

Apple’s VP of Industrial Design Jonathan Ive is associated with most filings, as is his team of over twenty designers.

Read next: Mobile Barcodes: The Challenges Ahead