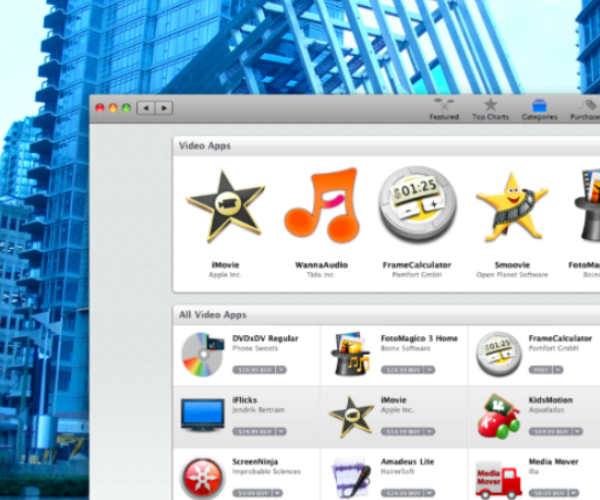 The Mac App Store is finally available and in case you missed it earlier, we’ve already posted our first impressions and we’ll continue to post reviews. And after spending some time with it this morning, we did however notice a possible glitch that will affect developers and users alike.

While checking out Smoovie, a stop motion app that costs $14.99 within the Mac App store, we saw that within the details that there was a free trial available on the official site. But after downloading, we went back to Smoovies page on the Mac App Store to find that the app had been marked as “already installed”. Since we didn’t purchase Smoovie directly within the Mac App store, it wasn’t showing up in the purchases category either nor did it allow us to “upgrade” anywhere.

We finally reached out to the developers to find out that the problem is that the Mac App Store version shared the same bundle identifier, a problem that they could have avoided if they’d realized earlier. This can of course be rectified by uninstalling the free version but it’s still an annoyance that developers should be aware of.

Another slight aggravation is within the categories although it does mimic the same browsing method within iTunes App Store on the desktop. When you’re looking for games, there is no option to view “all games”, forcing users to look through sub categories such as action and puzzles. An “all games” option is however available using the app store app on the iPhone. In saying that, I prefer to peruse the entire list, a process I generally use instead of using iTunes to discover new games.

All of the downloads within the Mac App Store are sent to the purchases page which sort them in alphabetical order, something that might not bother us now because it’s so new. But, as we continue to download more, it would have been better to also give users the option to sort purchases by category. After all, we can’t always remember the title of an app but we’ll surely remember what it does, making category sorting helpful.

While you’re in a category such as Video apps there are currently a few ways to browse; all apps, top paid, top free and top grossing. However, within the main page where all the apps are displayed, there is no option to sort the apps in alphabetical order. It’s all very random. In the iOS app store categories, there is a drop down menu to organize by release date, name and best-sellers. An option that appears to be missing on the main category pages although within its subcategories the drop down menu is there, minus the option to browse by release dates.

We’d like to hear your first impressions. Have you encountered any glitches? Do you have any ideas on how to make the Mac Store better? All in all, I’ve been having a blast and have found the experience of having everything in one place fantastic. An adventure that is beginning to put a huge dent on my credit card.

Read next: CES 2011: The future of food is wireless in the store and in your home