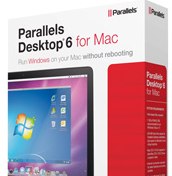 If there is one thing that Mac users can’t get away from it’s Windows. Yeah, try as we might it seems that eventually almost all of us need to use Windows for something. Some people choose to go the BootCamp route, but that’s pretty inconvenient unless you want to be fully in Windows (or need the full power of your Mac). The rest of us choose to use apps like VMWare Fusion or Parallels Desktop. Today Parallels announced version 6 of their virtualization app that boasts some nice improvements over v5 like a 40% speed boost and running at a full 64 bits (ah the joys of modern OSes).

One gotcha is that Tiger users (10.4) need not apply, this version is for Leopard and Snow Leopard users only.

Here’s the big question: should I update?

I started off with VMWare Fusion and thought it was okay, but not too great. When Parallels 5 came out I get it a try and thought it was vastly superior to Fusion. I did test the updated Fusion that came out at the same time as Parallels 5 and I thought it was no contest—Parallels 5 FTW. Now with Parallels 6, I might just skip the trial and upgrade right away. I don’t have to use Windows too often (mostly just for testing and for my publisher), but when I do, I have to have a lot open at once (graphics apps in OS X, Word in Windows…).