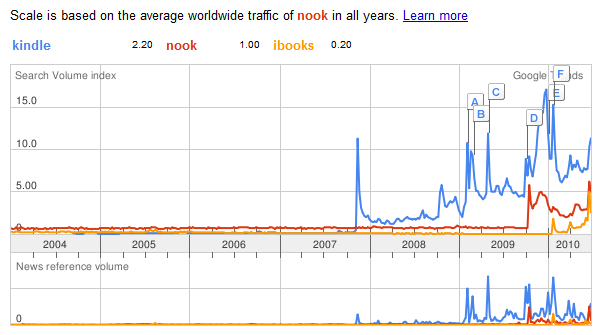 Own an iPad? Downloaded the eBay app? You should. It is by far the best way to experience eBay.

Watch Movies? Seen the IMDB App? It is so much better than the website.

Use Twitter? 81,43% chance you are not using Twitter.com but an App.

It seems that more and more Apps are replacing websites in a time when more and more applications are moving to the web. What exactly do we want? Email went from the Application to the Cloud with Gmail, and we love it. The same for Flickr for photos and Google Docs for documents. At the same time Twitter started out as a website but quickly moved to applications on multiple platforms. It is clear that just moving everything to the web isn’t the ultimate solution for everything. That eBay and IMDB app are clear examples.

Not too long ago Adam Richardson published a guest post on this blog in which he claimed the “Death of the Browser“. Richardson explained how the notion of a web browser will disappear as its content gets embedded in widgets, gadgets and machines – just as we will be ‘always online’ we will also ‘always be in a browser’. Just like there won’t be a need to announce that you are ‘online’ there won’t be a need to ‘browse’. Hence, the death of the browser.

I have a different vision: the death of the website. Many successful ‘Internet’ start-ups now run without the need for a website. They might still have one but it won’t be the centerpiece of their existence. Google without a website would be unthinkable. Twitter without a website? Not so far fetched at all.

Ever visited Shazam.com? I hadn’t until I started writing this article. I have however been using their app on the iPhone for a week now. There isn’t much you can do on their website either. It basically tries to get you to download the App as quick as possible as that is where the value of Shazam really lies.

Is it so hard to imagine a day where the Twitter home page will do the same? “Download Twitter for iPhone, Twitter for iPad or Twitter for Desktop and get Twittering!”. Oh sure, there will also be a web interface to Twitter for people who want to do dry run before they install stuff.

The future of the Web might very well be away from the browser, away from the Web and “app’d”. What websites do you see moving to predominantly to the App world soon?

Read next: iPad 3G Available In US On April 30th