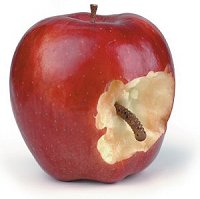 Another week, another crop of Apple news, commentary, and rumors. This week however ended on quite the negative note.

In the honor of fairness, after much positive Apple news in the last seven days, we bring to you the other side of the coin. The Apple anti-hype.

Mark Suster weighed in with an article entitled “App is Crap (why Apple is bad for your health),” which has a title that is hard to misunderstand. He claims that the Apple App store is a possible waste of money for companies, and companies that are built on the app store are making a serious mistake. “iPhone is not a business model unless you’re Apple.  It’s a channel.” Mark says.

GotteBeMobile wrote a shorter piece on why “Jobs’ Flash Attack Puts iPad Credibility on the Line,” something that we have been talking about here on TNW quite a lot in the past week. GBM points out that the other tablet manufacturers are planning on supporting Flash, meaning that the iPad will be alone in the no flash corner. Will websites leave Flash? Time will tell, but people seem a little annoyed at Apple telling them what to do.

In more App store approval news, TechCrunch is reporting that Apple might have just banned sexual applications from the app store. Not good if you have a bit of a sensual streak. Apple has yet to respond, but has a huge number of developers screaming in rage after their apps were banned overnight.

Finally, will you have to pay for Hulu on the iPad? Not bad news exaclty for Apple, but you can guess that this is going to annoy a good number of potential iPad owners. You have to buy the device, and then buy content that you used to get for free on the device that you already had to play on the device you just paid for? Not so good.

Apple may be making billions, but it is not infallible. Yet, at least.