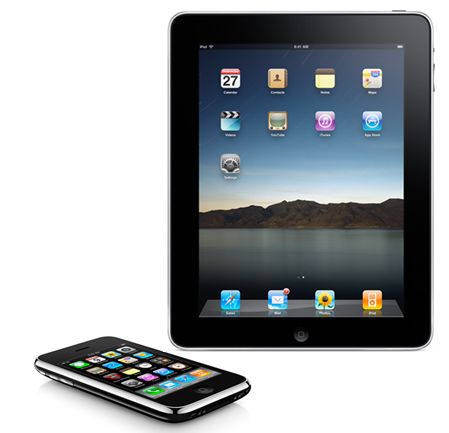 Yesterday, I was trying to find tech news that didn’t relate in some way to Apple iPad and, to be honest, struggling.  So instead, let’s take a look at an alternative reality.

Let The Next Web take you to a world where we’ve been using iPads for years and now Apple’s just gone and announced a pocket-sized version with a camera and phone built in.

They’ve only gone and called it the iPhone…

I began to reflect on the whole build up to last Wednesday’s Apple iPad announcement.  The months of speculation and hype, in amongst the counter-speculation and and counter-hype.  The rumours allegedly seeded by Apple, along with the rock-solid stories, videos and screenshots emerging from bloggers-in-the-know most of which turned out to be fake after all.

I then began to muse on the irony of people celebrating the fact that stuff is getting bigger.  For years, tempted by alluring glimpses from science fiction, we’ve dreamed of devices getting smaller whilst being able to do much more ‘stuff’.  Now it seems odd to seem to be revelling in things going the other way.

‘that’s a pretty hefty looking phone and compared to my current cellphone, it weighs a ton’

When the iPhone was announced three years ago, as well as the global swoon at its huge potential and seemingly effortless useability, I’m pretty sure that somewhere there was a reaction that went along the lines of ‘that’s a pretty hefty looking phone and compared to my current cellphone, it weighs a ton’.

In the decade leading up to the launch of the iPhone we’d become used to cellphones getting smaller… much smaller.  Separately there were Palm Pilots, early Blackberrys and a rash of palmtop devices running Windows CE and the like, but by and large they were seen to sit apart from day to day cellphones as ‘a breed apart’.

Three years ago, apart from the true evangelists, most executive Blackberry users still carried a separate, smaller mobile handset.  They wouldn’t have been seen dead lugging a comparatively huge Blackberry to their ear to the amusement of their underlings with their dinky mobiles and snazzy new Bluetooth earpieces.

Suddenly, with the arrival of the iPhone, this ‘my phone’s smaller than your phone’ snobbery began to fall away.  The opportunity to gracefully surf the web in a truly efficient, engaging and entertaining way, suddenly became cooler than trying to make the most of the limited mobile web services available on most other cellphones.  Users of ordinary dinky mobiles suddenly realised that they’d been trying to read a newspaper through a keyhole for years.

So… the last two to three years have been about living with iPhone and competing with the iPhone.

Whilst there are still many small cellphones out there, they’re usually less smart than the iPhone.  That doesn’t mean people don’t want them, it just means that the slightly larger, smarter phone has got its credibility back.

Imagine, though, a world in which the iPhone hadn’t come along.  People would still be wowing each other by learning strange new ways of writing with little sticks and prodding them at dull but earnest devices which could run little spreadheets or even pretend to be a Star Trek Tri-corder at best.

Elsewhere in the world of personal computing, netbooks may well have emerged and we might even have seen Apple launch a tablet device something like the iPad.  This ‘iPadalike’ might even have enabled users to browse the web, read books, play games, send emails and chat with friends in social networks.  It might have become revolutionary in its own right.  It might have killed off netbooks.  The Amazon Kindle might never have got off the drawing board.

So.  Keep imagining a world where we’ve all grown to love the iPad.  The market’s flooded with competing tablet computers and the world is full of people gazing gooey eyed into their laps as they lug their shiny slates around with them whilst chatting on their dinky cellphones.

Imagine then the hype, the speculation, the drama and the fuss around the news that Apple is about to launch a hand-held version of the iPad.  Not only will it be able to do everything the iPad can do, but it will fit into your shirt pocket, have an onboard camera and you’ll even be able to USE IT AS A PHONE!  Wow!  Suddenly our drive towards miniaturisation is restored.

Dumpsters around the globe would be full of cracked and chipped iPads as Apple fanboys rushed along with the rest of the world to pick up something they were calling the iPhone.

If things had happened that way round, do we think there’d still be a market for the iPad today?  Really?

In many ways iPad 1.0 does less than than the first iPhone did, but yes, it does have the potential to carve its own new and distinct future.

However, if we’d been living with iPads for the last two years when suddenly Steve Jobs was standing there holding up a beautiful, slick, pocket sized version with a camera and phone built in, surely the market for the iPad and tablets like it would struggle to make a dead cat bounce.

It’s not that I think the iPad’s bad.  I don’t.  I’m looking forward to getting my mitts on one and watching as we all begin to create new and as yet unimagined uses for it.

However, if you’re wondering why this mythical tablet device has been held back by Apple for so long, maybe that’s because they couldn’t launch it before now without cannibalising their own business.

If they’d launched it three years ago, then Apple’s own vision and creativity combined with Moore’s Law’s continued drive towards smaller, better, faster computers we might this week have been putting it out to pasture and welcoming its sleeker, sexier cousin the iPhone to the market place.

Read next: Client: “That font right there!  It’s clean yet edgy...there's no way i've seen that font before. What is it?"