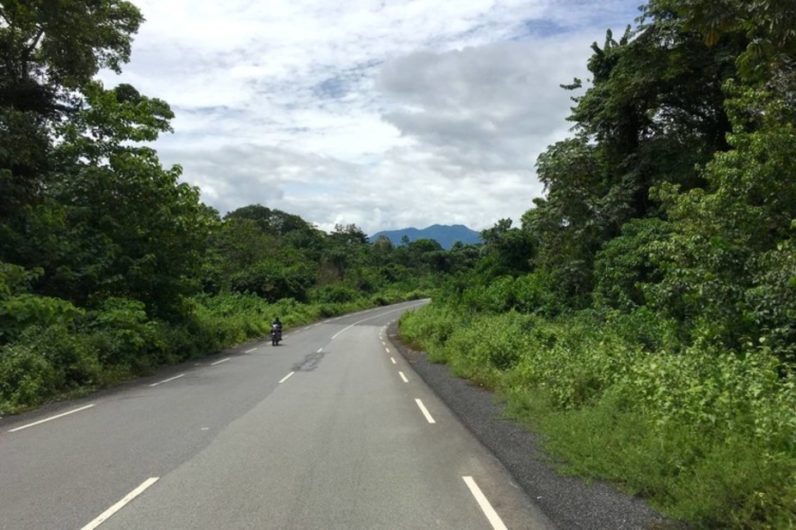 Deforestation is still increasing exponentially in tropical regions. Some of the worst regions in the world are the Amazon rainforest, South East Asia and Central Africa. Between 2010 and 2015 there was an annual loss of 7.6 million ha of forest leading to changes in rainfall patterns, loss of biodiversity and contributing to local and global climate change.

Regions in South West Cameroon have also been seriously affected by deforestation. Until recently, forests in this province remained relatively intact because they were so remote and inaccessible. But that all changed 11 years ago with the start of a major road project connecting Cameroon and Nigeria and extending the Lagos-Mombassa Trans-African Highway.

The road, which was completed in 2013, has brought social and economic benefits to the local population of 3 million Cameroonians. These include improved transport for people as well as agricultural products which has boosted regional trade. New houses have been built and new villages developed along the road.

But the road has had negative effects too. Deforestation and forest degradation has risen because of an increase in illegal logging activities and farm development in the forest. This is affecting forests that are the lifeblood of local communities. It’s also threatening critically endangered species such as the Cross River gorilla.

A project conducted by the African Conservation Foundation and the Environment and Rural Development Foundation shows that it is possible to intervene in ways that can protect forests like these. Using sophisticated data collection methods, and involving local communities in forest monitoring and management we have been able to mobilise a new generation of forest guardians. The project shows that emerging technologies and big data can take conservation to a new level.

Infrastructure versus the environment

Road-building and infrastructure development is one of the most pressing threats to forests and biodiversity worldwide. Recent research warned that we are currently living in the most explosive era of infrastructure expansion in human history. This is having a major impact on ecosystems and species, especially in previously untouched areas in the tropics.

With the help of the Global Land Analysis and Discovery forest change detection data, available through Global Forest Watch, we conducted a time-series analysis of tree cover loss before, during and after the road’s construction.

Not surprisingly, we found a strong relationship between the start of the road construction and increased tree cover loss in the road’s direct vicinity. Through ground-truthing, direct observations on the ground, we established this was a result of increased illegal logging and conversion of forest to agricultural land and plantations.

We prepared tree cover loss maps for each year from 2001 to 2014. We also conducted an incremental time series analysis of tree cover loss data. This was to see the effect of road development on tree cover loss in the area. We created an animation showing the rapid changes in the forest.

The beginning of the deforestation coincides with the 2008 start of the road construction works. It significantly accelerates towards the completion and official opening of the new road in 2013 and beyond. The location and reach of deforestation are not evenly distributed. In a few cases we were able to establish who is responsible for the illegal logging and clearing.

These changes in local forest cover have a huge impact on ecosystem services. These services include watersheds functions, provision of vital natural resources including food, medicines and fuel, maintenance of local climate, prevention of erosion, landslides and flooding, nutrient recycling, and sustaining local cultural heritage. People in this mountain area and the down-stream areas, are relying on these forests for their livelihoods and ultimately for their security and survival.

The deforestation taking place in this area could have been prevented. The Convention on Biological Diversity stresses the importance of Environmental Impact Assessments to identify the risks, opportunities, but also the anticipated side-effects associated with transport infrastructure projects.

Preventing further deforestation depends a great deal on monitoring, timely detection and local law enforcement. Real time data has a critical role to play in conservation. A small number of rangers are trying to protect vast areas of rainforest. They need real-time information on what’s happening and where deforestation is taking place.

Our project demonstrates that strategies that are inclusive results in a more effective and sustainable solution to deforestation. These include involving local people in land use planning, monitoring protected areas and ensuring that financial or other benefits are shared.

Consulting available big data should be mandatory for environment assessments. These services have a unique position to support unbiased, science-based decisions based on independent information on ecosystems worldwide.

Read next: Songwhip links to songs from Spotify, Apple Music and YouTube all at once