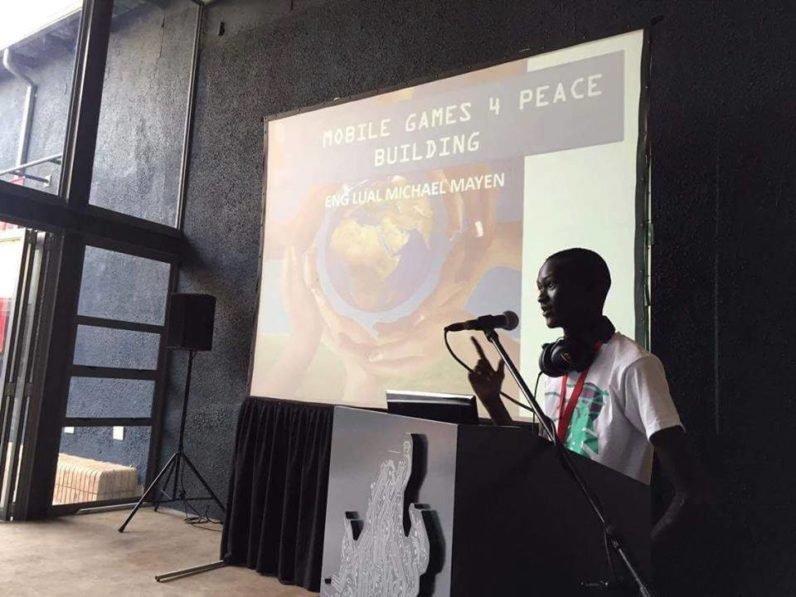 As violence escalates in the worlds youngest nationstate of South Sudan, an unexpected event has popped up; the countries’ very first Global Game Jam in capital city Juba. I spoke to organizer Lual Mayen to ask him how he went about organizing such a lighthearted event in a country that’s on the brink of a “Rwanda-like” genocide, according to the U.N. Human Rights Council.

The 24-year-old Mayen is founder of JUNUB Games, a South Sudanese community of game developers, artists, designers, games lovers, and coders that he founded in September of 2016. His goal with JUNUB Games is to “create games for peace building,” Mayen told me in a chat on Facebook.

Since its inception, about 20 developers have joined the community to be tutored by Mayen in making games in Unity.

The company has thus far launched two games. A mobile game called Salaam (‘Peace” in Arabic) and a board game called Wahda. The last game is going to be distributed in refugee camps in northern Uganda and Protection of Civilian (POC) sites across the country, where a hundreds of thousands of displaced Sudanese are currently harbored.

According to JUNUBs website, the game will be given away to “raise awareness among refugees and internally displaced people to live in peace among themselves and continue doing so once the war ends.”

The three-day Game Jam Mayen is organizing is also part of his ongoing efforts to “make games related to South Sudanse culture so the local people can get attracted in to the industry,” he told me.

His reasoning is clear. “Since most of the youth are the ones playing the games and they are the ones involved in the war, as the population of the country is 75% youth.”

“Our idea is to get to our community know the potential of games as they have been playing international games. So we are focusing on creating local games.” In the end he wants the community to build “more games exposing the dangers of war.”

Even though the news coming from South Sudan has been pretty grim lately, Mayen told me that the situation in the capital city is calm. It’s mostly the other parts of South Sudan where it’s not safe. He said the lack of food leads to frequent robberies on the roads.

Another problem stemming from the war is that Mayen is having difficulty inviting people “from other parts of the world, because when I invite them to the country they may not come because they’re afraid of the war and conflict.”

This fact makes it hard for the community to find funding for their various projects. Mayen would like to speak at the upcoming Game Developers Conference in San Francisco, but lacking funds for travel puts a tough brake on that ambition.

Not that that makes Mayen any less ambitious. When I asked him about his future, he told me he wants to have a great game studio, and also to “bring Silicon Valley to South Sudan,” a goal that was underlined by Upper Nile University Professor Dr. James Alic Garang, who named him as a “Sign of Silicon Valley Coming to South Sudan” in front of the Council of Ministers.

In a country that has been torn up by decades of ongoing violence, civil war and genocides, Mayen stands out as a beautiful glimmer of hope. He’s still looking to partner with other organizations to get their message out, so if you’re interested in helping out someone who totally deserves to be helped, reach out and I’ll hook you up.

Update 02/16: Got an email with this in it today: “A community-organized crowdfunding campaign has coalesced to raise funds for Lual to speak at Global Game Jam, with Global Game Jam as the official non-profit sponsor. The goal is to raise $2,500 – in the first hour we have already raised $1130 – 45% of our goal!” If you’d like to help Lual tell his story at Global Game Jam, click here.

Read next: MongoDB Ransomware is being sold online