Started just five years ago in South Africa, Globa is now an international money transfer and mobile payment platform. It continues to grow rapidly, and the firm is now looking to go global – once it’s taken over the whole of Africa.

Initially developed to provide the unbanked community with a means of making payments, sending and receiving money without the need to get a bank account, Globa is currently in negotiations with a bank in Kenya and is already operating in Ghana, South Africa and Namibia. It also has offices in Salt Lake City, Utah.

Johan Meyer, one of the founders told HumanIPO that firms can use Globa to pay staff, as they wouldn’t need a bank account to get their money – plus you don’t need to carry the risk of doing cash payments weekly or bi-weekly.

“We are the wallet system behind ZunguZ,” Meyer says. “Globa is the Zunguz processing engine and wallet. We provide our users with the ability to send, receive, ask, withdraw money via SMS, WAP or the Internet. But because of the fact that most of our users don’t have smartphones or access to the internet we found that our SMS solution is the most popular solution.

“We started Globa to provide our clients with the ability to transfer money between the USA and Mexico, but because both of us are from Africa we wanted the product in Africa as well. At the end, it turned out that the African market was much bigger than we ever expected.” Meyer adds. 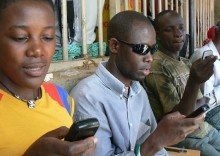 The firm is currently doing bulk payments for its more than 7,000 individual vendor users, to up to 2,000 in a single transaction apart from the companies using Globa as a processing engine and wallet, like Zunguz.

Johan told HumanIPO that Globa offers an extensive list of tools developed to give vendors the ability to integrate the service into their online and mobile products and thus enabling any developer or vendor to turn his or her mobile phone into a mobile storefront.

Apart from using SMS options, Meyer says their recently launched USSD solution is also picking up. The firm also has agents – mostly in the USA, Mexico and in South Africa.

Meyer says that with over R12-billion ($1.42bn USD) still unbanked in South Africa, according to the Banking Association of SA, cash is still a vital form of exchange. And 2.5 billion adults, just over half of world’s adult population, do not use formal financial services to save or borrow. 2.2 billion of these underserved adults live in Africa, Asia, Latin America and the Middle East.

The service is also a first for South Africa’s more than 70 percent population who are  active mobile phone users. South Africa expects to have more than 50 million people by the end of this year.

Meyer says the majority of service providers employ a huge percentage of the unbanked population in South Africa. He adds that there are strict legislations associated with opening a bank account in the country, of which the major implication is proof of address.