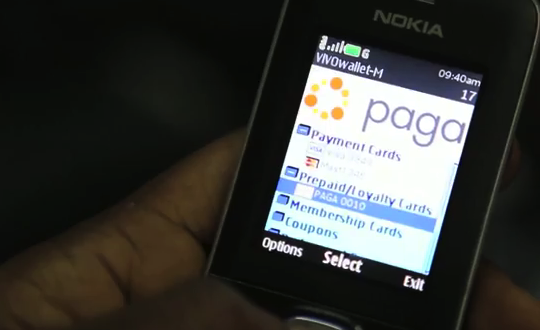 With the success of Safaricom’s mobile money service, M-Pesa in Kenya, analysts have looked to other African countries as potential mobile money success stories. A key market with potential is Nigeria. With over 90 million cellular phone subscribers in the country, it is Africa’s largest mobile phone market and is one of the fastest growing mobile markets in the world.

Currently only 20 million Nigerians out of the nation’s 150 million citizens have bank accounts. As such, there is tremendous opportunity for Nigerian mobile money services to provide access to financial services to millions of unbanked Nigerians.

One of such mobile money services looking to tap this potentially lucrative sector is a Nigerian company called Paga. Founded by Tayo Oviosu,  a former Vice President at Travant Capital Partners and a former Manager in charge of Acquisitions & Venture Investments at Cisco, the company aims to provide financial access to any Nigerian with a mobile phone or internet enabled device.

In a recent interview with The Next Web Africa, Oviosu said that so far the service has about 17,374 users and has done over N100 million (about $666,666) in transaction volume  since it formally launched to the public in February 2011. According to him, the service witnessed a 95% growth in transactions in August alone and he estimates that the Nigerian mobile money market would be a billion dollar industry by 2015. Since the company’s launch, Paga has hired over 60 staff and about 250 agents around the country. To market the service effectively in the market, Paga engaged in awareness drives in some key Nigerian cities such as Lagos and Onitsha where it rode Paga branded buses around the city to raise awareness. To drive its penetration into the market, the company has begun partnering with key organizations such as African multi-channel pay television provider, DStv. Through the partnership, Nigerians can pay for their DStv subscriptions either directly from their mobile phones or through Paga or DStv retail agents around the country. Paga also recently partnered with Nigerian discount buying site, Dealdey to integrate Paga with the service’s payment interface. Oviosu confirmed to The Next Web Africa that even more partnerships are in the works thus bringing convenience to the country’s bill payments system.

Investors have taken keen interest in the market including acclaimed Skype and Baidu Investor, Tim Draper. Though Oviosu declined to give official figures of the size of Draper’s investment, he did confirm that millions of dollars have been invested so far in the business and that Paga is looking to raise tens of millions more.

By 2015, Oviosu hopes that the service would have expanded to about 15 million active users.

With such strong market potential, Paga is bound to face competition from competing services in the market such as eTranzact’s M-Teller, United Bank for Africa’s U-Mo and E-Soft’s M-Naira amongst others.

However, it appears the market leader will undoubtedly be the mobile money service that successfully creates the most ubiquitous retail agent network across Nigeria’s vast consumer market. We will keep you posted about developments in the market.

Read next: Google to allow European users to opt-out of Analytics data collection