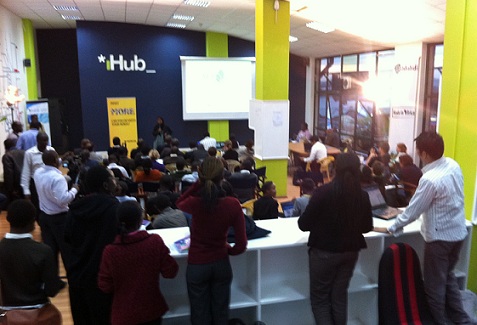 TNW Africa has previously shared the news about Pivot 25, an upcoming mobile developer challenge in East Africa. Set to take place in Nairobi, the challenge aims to spotlight some of East Africa’s most innovative and promising mobile startups to an influential community of operators, venture capitalists and angel investors.

To further unravel some of the developments going on in the region in general, and Nairobi specifically, we caught up with Erik Hersman. Hersman is co-founder of Ushahidi and founder of the iHub, a fast-growing incubator space for Kenyan startups, investors and technologists. Raised in Kenya and Sudan, Erik is a widely respected technologist, blogger and commentator in the African tech scene. In the interview below he shares some insights about activities going on the East African tech space as well as the upcoming Pivot 25 contest.

Nmachi Jidenma: Can you tell us a little bit about the iHub?

Erik Hersman: The iHub, at its very core, is a community of creatives and technologists bound together by a common theme: innovation. We are located near downtown Nairobi and have a fantastic space for our members to work, network, learn, and create. We opened our doors just over a year ago and recently surpassed 3,600 members. It became apparent a few years ago that East Africa, and specifically Nairobi, was going to be a hot-bed for technological innovation in the coming years. It became a reality in March of 2010, and it’s been fantastic to see what our members have done with the space in the short time that we’ve been in existence.  It’s a place for investors, corporates, startups and academia to meet.

Nmachi: What are some of the more exciting ideas and initiatives that have come out from the iHub?

Erik: There’s a vast array of ideas and initiatives being formed and built at the iHub every day, but some of the more exciting ones to me are those ideas that I can see visibly changing specific aspects of people’s lives. For example, one of our members Jepchumba launched African Digital Art’s first event, a website which has transformed the digital art space in Africa by giving thousands of artists a platform to showcase their work on, something that was essentially unachievable just a few years ago.  Other great examples of companies started, or connections made, include mFarm (a mobile agricultural information tool), Rupu (a Groupon clone for Kenya) and investors found for Eatout.co.ke, among others.

The name that we’ve built has also allowed us to do some pretty exciting things for our members, such as our Fireside Chats, where our members get to hear from top-level CEOs from all over Kenya about their successes, failures, and the lessons they’ve learned along the way. Recently, we’ve had the privilege of bringing in names such as John Waibochi, CEO of Virtual City Limited, and Michael Joseph, CEO of Safaricom.

Erik: The iHub is all about innovation – that’s what we founded everything on. The m:lab is, in many ways, the logical next step for much of the innovation occurring in the iHub. More than 90% of Internet use in Kenya is from mobile phones. Standard web innovation is great, but if you really want to reach the majority of East Africa in a viable, marketable, and scalable way, you have to give them something they can work with from their phones.

Many of our iHub members have recognized the potential of the mobile space, and have spent a lot of time and energy exploring and developing for it. At the end of the day though, the iHub is not an incubation hub, we’re an innovation hub. There’s no space for offices or closed meetings, and that was very intentional. However, we recognized that many of our members may need exactly that in order to take their applications and mobile innovation to the next level. So together with the m:lab consortium, we began construction on m:lab East Africa earlier this year and are set for launch immediately following the conclusion of Pivot25 on June 16th.

Nmachi: What does the Pivot25 initiative hope to achieve?

Erik: Pivot25 was created to give these phenomenal mobile startups a platform on which to share their innovations with the world, while also giving them access to markets, investors, and media exposure on a level that would be impossible on their own. Some of the finalists are looking for significant funding to take their venture to the next level, and Pivot25 is a great opportunity for that. However, some of the finalists are fully-funded and are simply looking to get their app out to a broader audience, and Pivot25 is also a phenomenal opportunity for media and market exposure.

Our goal is to do whatever it takes to give these 25 finalists every viable means to take their project to the next level, whatever that may be. In doing this, we’re making Pivot25 into the premier mobile tech event in East Africa, and it will only get stronger each year. I’m very impressed with the finalists we have this year, and I am confident that many of these startups will be successful in the very near future. In the process of planning Pivot25, we decided very early on that we wouldn’t limit this to only iHub members. We have seen fantastic mobile innovation coming from all over East Africa, and we are proud to say that there are finalists from Tanzania, Rwanda, and Uganda amongst the 25 startups who will be pitching at the competition.

Nmachi: What do you think is responsible for Kenya’s emergence as a prominent hub for Africa’s more popular tech innovations such as M-Pesa and Ushahidi?

Erik: There are two reasons.

First, big name companies are attracted to talent. There’s a reason that Silicon Valley is where every tech startup wants to be. It’s an ecosystem built on talent. Nairobi is exploding with world-calibre techies, and companies such as Google, Cisco, Nokia Seimens, and Airtel, (all of whom have built their African headquarters in Nairobi) have recognized that. As far as the emergence of new innovations, I think this can be attributed to the same raw talent that brought all these companies to headquarter themselves in Nairobi. When you get a group of strong developers or coders together, they can come up with some pretty incredible stuff – things that could turn into the next M-Pesa or Ushahidi in just a few years. When places like the iHub work to facilitate these communities, dynamic things can happen.

Second, the innovative ideas that “catch” in places like Kenya are built for a different use-case than you traditionally see the US and Europe.  Ushahidi and M-Pesa weren’t created in the West because the needs are not the same.  The interesting thing is that as these platforms come online, they do tend to go global, and I think we’ll see more of this over time – where African startups start making more waves on the global scene.   Certain cities tend to be hubs, success breeds success, so when someone “wins” in a place like Nairobi, it quickly attracts more entrepreneurs and spinouts.

Nmachi: How best can other cities across the continent cultivate the sort of tech community and vibrancy that is present in places like Nairobi?

Erik: The key is just that, community. The easiest way to foster tech innovation and vibrancy is to give techies a community to be a part of. That’s where the power is, in the community, not in a single person or company.  We’re seeing new hubs/labs growing up in other cities around the continent now too, that’s part of what’s needed for community catalysts to engage with and grow the engagement.  However, it also takes having a critical mass in other areas, namely:

Nmachi: What are some of the key challenges faced by African mobile developers specifically and tech entrepreneurs in general?

Erik: As far as challenges for African mobile developers, it’s very hard for them to find a platform from which to launch. That was one of the main catalysts behind Pivot25 – we wanted to give these high-calibre startups the chance to pitch in front of VCs, Angel Investors, and Corporate Executives from across the globe. Incubation space is also very hard to come by in Africa, which is why I’m so excited about the m:lab. And incubation is more than just office space, it’s access to networks, mentors, markets, and an opportunity to grow yourself to the next level.

Tech incubation spaces are popping up all over America & Europe, but that same excitement has only just begun in Africa. When it comes to tech entrepreneurs in general, I think the speed at which tech innovation happens now is a huge challenge. The barriers to entry are few and far between in most tech markets, so your competitive advantage has to either lie in you reaching the market first with a very good product, or by having more money and resources than your competitors. From there, there  is a lot of uncertainty. You never know what other people are creating, or whether a competitor is going to launch a product tomorrow that will put you out of business. It takes a constant hunger for innovation and value creation to stay ahead of the pack, and that’s exactly how great companies like Virtual City, Mobile Planet and Craft Silicon have found success in the market.

Nmachi: How can African tech entrepreneurs better create tools that are contextually relevant to the continent’s unique challenges and opportunities?

Erik: This is a difficult question. Here’s my short answer: smartphone market penetration in Africa as a whole is virtually non-existent. Very few people outside of the big cities have smartphones. This limits developers in that they can only fight against these unique challenges we find in Africa in very simplistic methods, most commonly through SMS and USSD apps.

However, as you mentioned, there are also unique opportunities because of this. A great example of overcoming this hurdle and finding and opportunity for innovation is a startup called M-Farm, a Pivot25 finalist that has designed an app to give farmers accurate market pricing for their crops via SMS, while also allowing them to “group buy” farm inputs such as fertilizer with other local farmers at a significant discount.

Nmachi: What key trends do you see emerging in the African tech space in the next 5 years?

Erik: As I mentioned earlier, I believe that mobile development will be a huge trend of success in the coming years. Today, you see very few smartphones in the hands of non-techies or business people in most parts of Africa, the main reason being the prohibitive pricing that has been present for the last few years. However, the IDEOS, a sub-$100 Android phone, recently made its way to Kenya and I believe that it will lead a wave of low-budget Android smartphones that will begin to penetrate the African market in a significant way. This will give developers a platform for their apps in the local market, allowing them to be fiscally sustainable in building apps designed to combat local problems.

Right now, it’s nearly impossible for developers to make money creating smartphone apps for local use, simply because the market is so small. As the market share of smartphones continues to rise, I firmly believe we will see a continuation of this incredible wave of mobile innovation beginning to solve problems all over Africa.

Nmachi: Amazing insights. Thanks so much for joining us at The Next Web Erik!