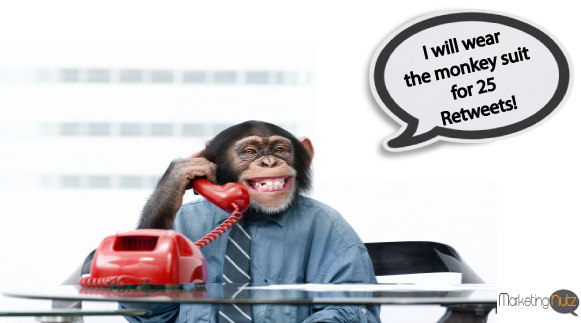 I didn’t want to even acknowledge this but I’ve caved in. Let’s get to it. 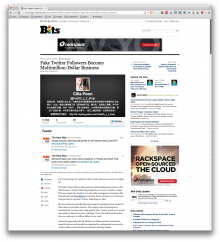 We received an email from the author, Nicole Perlroth, prior to the article being published requesting comment for the article. It was late (in London) on a Friday night and I was having dinner with friends and family. Still, I took the call and listened to her question, something along the lines of “Some researchers have highlighted your account to have an abnormal number of retweets immediately after publishing, why do you think that is?”

By then I was already aware of the fact that the article was about companies who buy fake retweets. I explained that there’s two perfectly simple reasons for why we get a spike of retweets after we publish our articles, and it’s got nothing to do with buying retweets. We don’t buy retweets.

One reason is that many popular Twitter accounts, particular ones that were part of the infamous Twitter “suggested user list”,  have retweet bots (including Forbes and the New York Times) but we categorically have nothing to do with them. David Petherick (who wrote for us years ago) was auto-tweeting our stories from RSS as far back as 2009, and still does. Why would people create accounts to just retweet from? More on that in a moment. 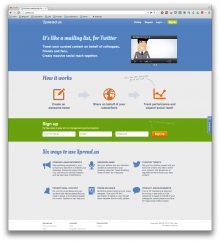 The second reason we get so many retweets immediately after publishing is Spread.us. In February 2012, as part of TNW Labs (our internal incubator) we built a tool called Spread.us (yes, I hate the name too). The idea was simple: to let anyone automatically reshare tweets. In a publishers case, such as ours, it would let readers share, say, ‘all Apple stories’ whenever they were published, or only “breaking Twitter stories” for example. You could even set it to limit shares to one story per day or week to avoid over sharing.

Anyhow, to trial the product (as we do with many of the products out of TNW Labs) we placed a “Spread.us button” on TheNextWeb.com. I should note the purpose of the Spread.us button was that it made it easy for anyone to sign up to the service and begin sharing – similar to a retweet or Facebook Like button.

Sure enough, over the next few weeks, we began to notice more retweets. Fans of the site were using it, people who wanted to appear to be “first” to share a story began using it, social media nuts began using it but also, unfortunately, people who create fake unmanned twitter accounts began using it. One of those fake unmanned accounts is the example Twitter Account the New York Times included in its article. Despite the author claiming it isn’t using Spread.us, it is. Someone manually signed up to share our stories from that Twitter account.

All of these people signed up manually, and all receive an email notification after they’ve shared a tweet. We tested it for a few months and one thing was clearly noticeable, it wasn’t working as we hoped. Sure we got more retweets, and sure we (think) we got a little more traffic, but by-and-large, the tool wasn’t having the impact we wanted.

Three months ago we launched our redesign and we ditched the Spread.us button on our site. Spread.us itself is still live, has a user base, and the people who signed up to retweet our stories still retweet them. The product is still in beta but anyone can sign up now and create an account and have their staff, colleagues, friends, whoever, sign up to retweet their links. Why would anyone want to do that you ask? Let me explain by example:

Say a company like Coca Cola wanted to get the word out about a new product. They’d probably launch an advertising campaign, seek sponsorship opportunities, perhaps contact the press and more. Now how about as part of their campaign they asked their staff to share news of the launch? Yes, all 92,800 of them? Sure they could send a memo to all the staff and hope they all eventually get round to sharing it OR they could use a tool like Spread.us and whenever Coca Cola has a big announcement to make, no need to bother the staff any more, just use Spread.us. Of course the staff could limit the number of retweets to one per week, but let’s be fair, who’s going to say no to their employer over the odd retweet.

Why I’m angry and disappointed

Now why I’m angry and disappointed is because the New York Times, while kindly including a quote of mine clarifying what I just explained above, still decided to include our logo splattered across the article’s featured image. Clearly anyone visiting the article will assume we’re an example of a company who buys retweets. We don’t. Never have, never will.

Amidst all the research the author, one Tero Kuittinen, completed, he seems to have missed the fact that the answer to his question is right there in the article he’s sourcing from. Kuittinen did in fact email us prior to publishing the Forbes article requesting comment for a story. I responded with “How can I help?” I didn’t get a response and a couple of hours later, the article was live. I contacted the author via Twitter asking whether he received my email, he said it was in his spam folder. He eventually replied asking me the exact same question the NY Times author asked and I responded with a copy/paste of my explanation from the NY Times article. He thanked me and updated the article to say we don’t buy retweets and altered its title too.

Forgive me if I sound annoyed, but it’s one thing to be accused of something you didn’t do; but to give a completely reasonable explanation as to why it happens yet still be made to appear as though guilty, is infuriating. But then for another author to jump on the bandwagon, not do thorough research and publish an article asking the same question answered in the source article is equally mind boggling and infuriating.

No, we don’t buy retweets. Never have, never will.