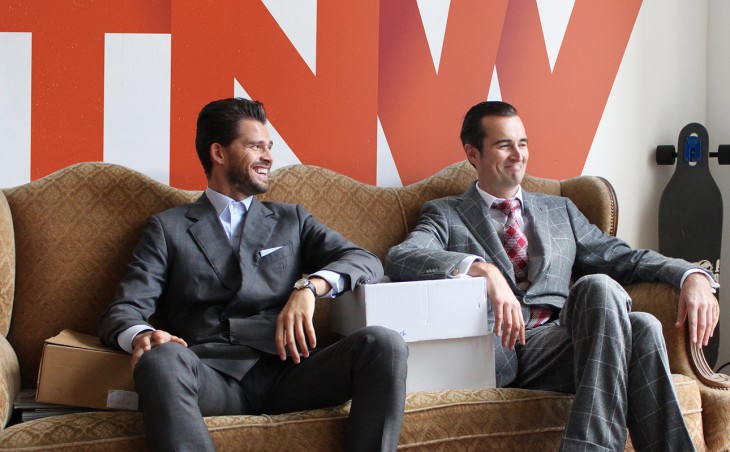 I have been working with The Next Web for 2 years now, but my very first TNW Conference was 6 years ago and I haven’t missed one since.

In 3 months from now we’ll be hosting the 8th edition of TNW Conference and it has become quite the experience. An experience that gets better with each year, so I thought it would be great to share some stories behind one of the biggest tech conferences in Europe.

So once upon a time….

Five days before the first TNW Conference, Patrick and Boris (co-founders of The Next Web) decided one afternoon to drive from Amsterdam to Paris. There was going to be a big press conference for the launch of an European search engine and they thought it would be a great opportunity to promote the conference.

During their 5 hour ride to Paris, they sold almost all their sponsorships for the event, calling each and every person they knew and telling them the main sponsor just cancelled, and they could have that spot with a 50% discount. To say this was stretching it a bit is an understatement, as they didn’t have a single sponsor when they got in the car.

That party that got out of hand – properly. We absolutely love technology and the Web but we also love to party. So if we can get a room full of tech enthusiasts partying, we’re more than happy.

One year we noticed that only 6 of the 70 bottles of champagne were served at the conference following a communication glitch with the bar that was meant to serve it. So we thought it would be good to kick it up a notch and hand out private bottles to as many people as possible. Needless to say I can’t describe any story that went on a half hour after this, but if I did the word hilarious would come up often.

Tariq Krim, a keynote speaker, calls Boris from a plane flying over Germany. He’s an half hour late and asks if we can switch him with someone else. Boris can hardly hear him and thinks it’s a prank call at first, but that’s all due to him whispering in his coat while he pretends to the rest of the plane he’s asleep.

It was 30 days before the first TNW Conference took place and we seriously only sold 1 ticket so far. Boris decided to take $15,000 – his last savings – to get a top name as main keynote speaker on the conference. His price was actually much higher but because we didn’t have more money we promised the rest after the conference. To quote Boris here: “I thought, f*ck it. If we’re going down we should do it right.”

The decision paid off. The conference ended up a success — with over 250 attendees — and it was decided that we’d do this more often.

In sickness and in health

In 2010, Boris got really sick. In a taxi on the way to the conference, Boris had already commanded the driver to stop so he could throw up. At the conference, he found himself excusing himself and heading to the bathroom every 3 minutes, while waiting for someone to drive by a doctor that could prescribe some pills that would stop all ‘bodily functions’.

Around 20 minutes later, Boris stands on stage with a big smile and no complaints, but remarks that he’s feeling very hot. He wasn’t able to go to the bathroom for 4 days after that, but the conference was a big success.

Before they organized the first TNW Conference, Patrick had never been to a conference. Boris just one.

They organized their conference to launch their own startup: Fleck.com. It seemed easier and cheaper than sponsoring another conference at the time. When the first conference was taking place, they owed the bank $80,000 and Fleck didn’t launch as it wasn’t good enough yet. Read more on this here.

Emergency in the sky

Adeo Ressi, founder of VC-rating site TheFunded and the startup incubator Founder Institute, flies back to New York the day after the conference. He has a hangover and a stomach ache but decides to get on board anyway.

Halfway through the flight, it turns out he has acute appendicitis (which is obviously deadly and requires immediate surgery). Recognising the emergency, the pilot decides to fly as fast as possible, while an ambulance is being prepared on the airstrip. He is treated on the airport and only just survives.

Michael Arrington, founder of technology blog TechCrunch (which was significantly smaller at the time), has the flu and opens our first conference with a fever of 40 degrees celcius. At the event he thinks it would be a good idea to hold a similar event in the US, dubbed TechCrunch 40.

Conversely, inspired by Michael Arrington, we believed the combination of our event with a technology blog could work rather well and started thenextweb.com in January 2008. At the moment, both The Next Web and TechCrunch rank in the top 10 of biggest blogs in the world.

We have big plans for the 2013 edition. Its going to be fun, inspiring and you will learn a lot in 2 unforgettable days. If you’re doing business online you need to have presence at TNW Conference. Join us and do business with over 2,000 people from 50+ countries.

See you there? Grab your Super Early Bird ticket at a 35% discount now!

Read next: Microsoft now provides developers with crash reports for apps that are rejected from its Windows Store