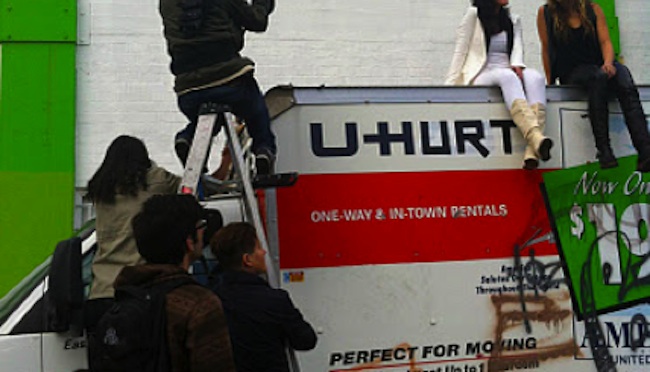 Apart from The Next Web conference coming up in April, SXSW is my  favorite tech event of all time. Why? Because it’s the most creative tech event in the industry, where brands compete to out-do each other in crazy and creative marketing pursuits that make you feel like you’re walking through a startup-like Disney World.

At any one moment during SXSW Interactive there are not only hundreds of panels, keynotes and roundtables, but much of the magic also happens outside the convention center where companies put on shows, take over lounges and bars and have quirky performances. Over the course of the four years we’ve been gracing the techfest, we’ve witnessed it grow bigger and bigger, with more of the big name brands like Pepsi and Chevy having a big presence there.

It’s the convention where Twitter launched and it’s almost a prerequisite that startups and companies do something crazy; last year The Next Web’s Patrick and I went to SXSW with only a Square and iPhone and competed to see who could make the most money which we donated to the victims Japan Earthquake relief fund. Klout had the pimping Klout house and pool where people got wet, and the search engine Blekko had a roof top party with Ashton Kutcher and Demi Moore.

We are no exception to some crazy SXSW plans and are very excited to announce our 2012 mission: We are setting up a live TV studio in the back of a uHaul to track the progress of StartupBus and broadcast live from the best events happening in Austin. Sponsored by Viadeo and LiveU, we will be broadcasting live every day from the 6th-13th March.

Three years running, StartupBus is one of the hottest entrepreneurial events to come out of Silicon Valley and it was a pleasure working on giving them coverage on their European tour to LeWeb. If you haven’t heard of it, StartupBus puts teams of complete strangers together on WiFi enabled busses, and they have to build and launch a web app by the time they get to the event. The ‘buspreneurs’ then pitch their ideas to a panel of expert judges where the overall winner is crowned.

There are 12 busses this year, and StartupBus.TV will be broadcasting live from the uHaul studio between the 6th -8th March, tracking and following the ‘buspreneurs’ as they build their startups and make their way from all over the USA to Austin for SXSW.

Between the 8th-13th March, we will then be broadcasting a daily live show with Silicon Valley influentials from the uHaul studio at SXSW. We came up with the uHaul idea because it means we can be mobile and drive around to all the best parties and events, rolling out the red carpet and interviewing the who’s who of the technorati.

None of this could happen without our sponsors, such as LiveU, which is enabling us to stream full HD content from anywhere in Austin. LiveU is the industry leader in portable video-over-cellular solutions and the benchmark for reliable and high-quality uplink.

Their live video pack is worn as a backpack and uses simultaneously multiple cellular and other links to provide a seamless broadband channel optimized for live, up to 1080p High Definition video transmission from the field. We are very excited to be working with LiveU who have also provided CNN, MyFox, Grammy Awards, TWiT and the NBA Finals with their technology.

It works by bonding up to 14 cellular (3G/4G – LTE/WiMAX) modems over multiple carriers, as well as multiple LAN and even BGAN satellite connections. This creates a broadband video uplink pipe over multiple narrow-band pipes. Using any camera, the fully-integrated self-powered compact unit provides video resolution ranging from CIF through D1 (SD) and up to 1080i HD. The bonded 3G/4G solution aggregates all data connections simultaneously to achieve high bandwidth and smooth transmission, even as bandwidth and signal levels change across the different connections.

Viadeo is a business social network with a global network of 40 million members, they are bigger than LinkedIn in China and we have been covering their growth and success for a few years now. Recently pushed into Russia and launched an API, Viadeo is expanding rapidly with offices in Mexico and promoting its API to the developer community to build upon its growing platform. Viadeo seemed the perfect fit to be involved in Startup Bus – a project that will promote their API to more than 300 ‘buspreneurs’.

Now in its third year, StartupBus is one of the most talked about projects in Silicon Valley. Complete strangers become ‘buspreneurs’ embarking on a three-day journey and having to get into teams, building and launching a startup by the time they reach their destination. At the destination there’s a pitch competition where the teams battle it out in front of a panel of expert judges. Last month we covered StartupBus Europe on their journey to LeWeb.

In the USA, the destination is Austin in time for SXSW, and this year StartupBus will be bigger than ever with up to 12 busses and over 300 enthusiastic developers, designers and hustlers coming together for a once in a lifetime experience. If you think you’ve got what it takes to become the next ‘buspreneur’ you can look out for an invitation to fill out an application – for more information, go to StartupBus.com.

The TV Studio in the back of a uHaul

You won’t be able to miss it – it will be The Next Web-, Viadeo-, LiveU- and StartupBus-branded, plus an ‘on air’ sign will flash on the side. We are planning a 24-hour ‘vidathon’ from the 6th -8th March, and from the 9th-12th we are scheduling in daily shows with tech influentials. We’ll will be stopping at all the best parties rolling out the red carpet and interviewing on the fly.

And… drumroll please – the first look at the StartupBus trailer:

Read next: Dick Costolo is right: The Jan 18th SOPA/PIPA blackout is "foolish" for businesses