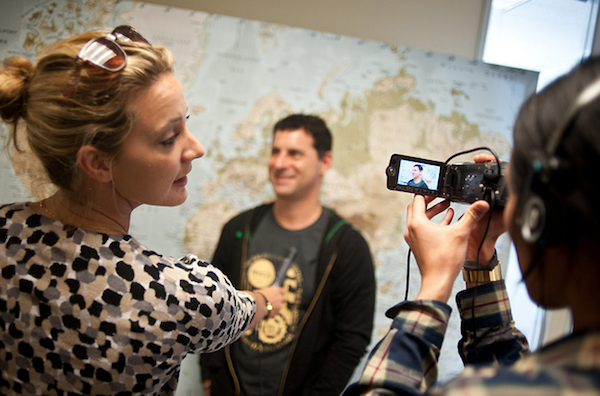 The votes are in and winners announced; geolocation app Avrigeo– a 3D visualization tool using Web GL technology that allows you to see how your network spreads out on the planet, map your contacts out and the connections between them-  was crowned champion of the Viadeo Developers Challenge last week. The competition took place over the past few months, inviting developers to use the Viadeo API to build a web app that helped better connect Viadeo’s 35million worldwide user base. Developers from around the world submitted applications for the competition, prizes included $10,000 and iPads plus one year of free 3scale API management products for the runners up.

The judges, who included blogger Robert Scoble, VC Richard Ling, Myles Weissleder, Viadeo’s CTO Christopher Thibault and yours truly, deliberated for over an hour to come to the decsion that Avrigeo deserved the winning title. Avrigeo not only used the Viadeo API but also Google Earth’s API to see how and where your friends are connected around the world.

“We are really excited to win and a little surprised as the competition was really hard,” said Paris based Quentin Ambard (24-years-old) and Matthieu Mouminoux (25-years-old) and their designer Vincent Hue, who built Avrigeo.

“We were thinking of providing an open source application for social networks and geolocalisation is something you don’t see everywhere; social networks like Viadeo, Facebook and Twitter just display a big list of friends but they don’t represent them, so using the Google Earth API was a nice way to have a world-wide overview of all your contacts,” they said.

What are they going to do with the winnings? They plan to provide a support for those who don’t have WEBGL enabled, using HTML canvas and  ‘if they can find an investor they will work on this as a full time project,’ adds Matt.

You can watch the judges deliberation video below.