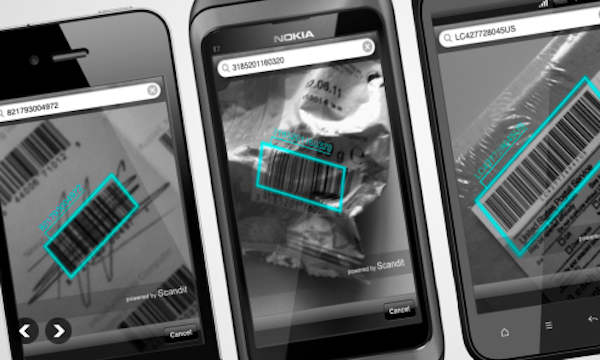 Mobile product interaction is hot property in the technology industry right now, with a number of startups trying to converge offline-online consumer experience. eBay acquired bar code scanning startup RedLaser last year in a move that will help eBay add to the $1.5billion revenue it made via mobile payments in 2010.

Endorsed by the global barcode standardization organization as its preferred technology, Scandit claims to be the fastest, most reliable barcode scanning technology that doesn’t require autofocus, which means it still works well with devices like the iPhone 3G or the Nokia E7. The orientation detection means it doesn’t matter which way you hold the product when scanning be it sideways, upside-down, or curved.

The company also offers real-time analytics in the form of Scanalytics which feeds back data from  applications about the products people are scanning, how often they scan and the scanning location so developers can better understand their customer’s behavior and needs.

For developers on a tight budget the company has developed an ad-supported price plan which means developers get access to Scandit’s technology for free to develop apps on iOS, Android and Symbian/Qt. Revenue for Scandit comes in the form of advertising revenue share and licensing of the SDK for iPhone and Android platforms, Scandit will also create value in building an aggregate database of consumer information from all the applications developed on it’s platform.

In the video above I test out the app and speak to the company’s CEO and co-founder Samuel Mueller.

Read next: New Perrier YouTube campaign is an interactive party