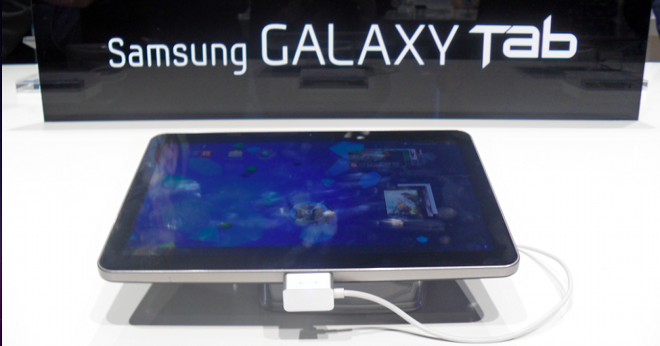 While some people find the 7″ tablet form factor just right, it’s never quite gelled with me. An iPad-style 9-10″ screen size really does make a tablet feel like a decent halfway point between phones and full-fat computers. So, can Samsung’s new 10.1″ tablet, sporting Android’s new tablet-focused Honeycomb flavour, tempt me away from my iPad? On first inspection, it could be a close call.

As we reported when official details first emerged, the Tab 10.1 sports a 1Ghz dual-core Tegra 2 processor and will be available in 16GB and 32GB models, offering both 8 megapixel rear and 2 megapixel front-facing cameras. What’s more, you’ll be able to shoot full 1080p video on this thing at 24 fps, with 1080p playback at 30fps too.

Sadly, there’s no word on pricing or a release date yet but you can be sure we’ll let you know just as soon as we can. As you’ll see in the short video here, this is one Android tablet we can’t wait to get an in-depth look at.

Read next: After Obama, the UK's Prime Minister is next for a YouTube probing