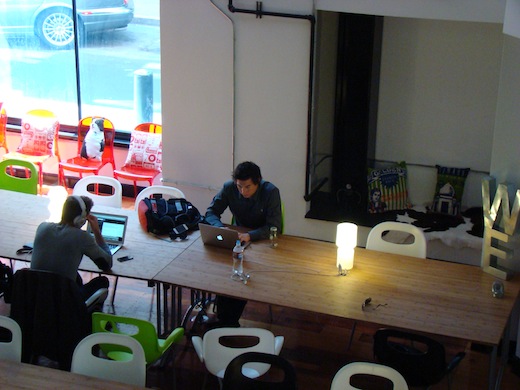 WeWork Labs, a coworking startup that recently out-grew its NYC offices, has officially announced that it is opening a new space in San Francisco at 156 2nd Street on May 14th, which will hold approximately 100 entrepreneurs, designers and developers. The west-coast initiative will be run by Kaitlin Pike, Seth Blank and Dave Nugent.

WeWork Labs NY, which had recently moved to a massive space at 175 Varick St, is also announcing new expansions will be happening this July, totaling to 34,000 square feet. In addition, the startup now offers health insurance to members for ~$360/ month, which should make its membership that much more worthwhile to freelancers. Clearly, these guys are doing something right.

WeWork Labs was founded in March of 2011 by Jesse Middleton (Backstory), Adam Neumann (WeWork), and Matthew Shampine (Hometalk). It’s goal as a space is to “foster collaboration among intelligent, creative and driven individuals who may not have otherwise had the opportunity to connect.”

Startups in WeWork Labs have gone off to accelerators such as 500 Startups, Techstars, DreamIt Ventures, ERA, and more.  Notable members and alumni include: Zemanta, Fitocracy, One Fine Stay, iDoneThis, Pricing Engine, NYTM, and hundreds more.  WWL is also home of three new startups that have joined the most recent DreamIt class – Tripl, Urban Cargo, and Indie Walls.