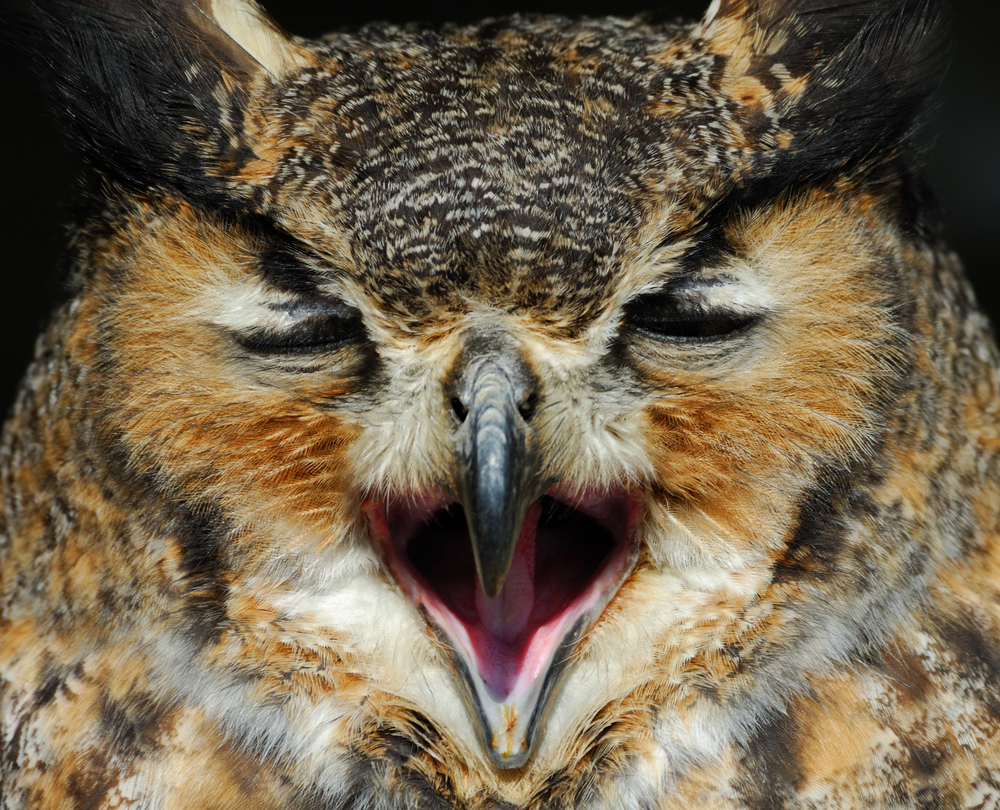 Welcome to our seventh Tumblr Tuesday, where every Tuesday we celebrate our love of Tumblr by interviewing the mastermind behind the blog. Tumblr, a New York City based startup, is like the FFFFound for the rest of the world. It’s as shareable and fast-paced as Twitter but populated with more in-depth text and rich images.

On September 9th, 2011, we reported that at an average of 37.5 million daily posts, Tumblr reached its first mega milestone of 10 billion posts. But Tumblr is only as awesome as its best content, and here ladies and gents, I present you with one of my all-time favorite Tumblrs: Hungover Owls. The Tumblr features dehydrated, fatigued birds on the verge of vomiting along with witty tag lines like, “Look buddy- I could either spend the rest of my day catching up on Mad Men, or I can spend it hating the shit out of you. You pick.”

The truth is, since owls are naturally nocturnal, whenever you snap a photo of one in the daylight, it’s bound to look a little disgruntled. I am fascinated by these symbolic Strigiformes, best known for their haunting hoots and mythological wisdom. So when I stumbled upon Hungover Owls, I was giddy with excitement to pursue this interview. Screw Angry Birds, it’s all about Hungover Owls.

CBM: Who is the man behind Hungover Owls? (aka what do you do IRL.)

J. Pat Brown: IRL I’m J.Pat Brown, Associate Editor and Staff Writer for the Boston-based blog and alt-weekly DigBoston, the link to which and twitter address, @digboston, I am contractually obligated to include in every conversation I have. Ever. I will say, working in the media is a huge advantage when you’re writing about being hungover all the time.

CBM: When did you decide to launch Hungover Owls? What was the inspiration? J.PB: The story I tell in the book’s introduction is pretty much what happened– I was really hungover, I had to go to a friend’s birthday party, where I spent the entire time trying to find an excuse to go home and die. One of her better, non-miserable friends had given her a copy of Squirrel Nutkin by Beatrix Potter, and I took one look at Old Brown the owl and felt a kindred spirit. I told my friend I had to leave the party to go home and create a blog of owls looking hungover, and that was that.

J.PB: Owls are indeed awesome, and if you don’t agree, there is something wrong with you. Thing is, I liked owls just fine before the blog, but now, my family and friends think of me as that owl guy, so I get inundated in owl-related crap all the time, like plushies and bookends and the like. My grandma got me a copy of the memoir Wesley The Owl, about a researcher and her familial bond with an adopted Barn Owl, and I groaned and poo-poo’d it ’cause I thought it was some feel-good “All God’s Creatures” crap. Then I read it, and it was “Holy Shit, owls are fascinating.”

CBM: Have you ever seen an owl IRL?

J.PB: I grew up in Brazil, and there was this awesome zoo in Rio- the Jardim Zoologico, that was just littered in owl pellets. Which is weird, because I never saw the owl. Just skeleton-filled cocoons everywhere. Which, when you’re twelve, is the raddest thing.

CBM: Do you have a favorite Hungover Owl? Will you please share… J.PB: “Why is it so…day right now.” is one of those sentiments I know too much about.

CBM: Have you come across a Hungover Owl that reminds you of yourself? If so, please share.

J.PB: Spoiler alert: almost everything from the site is lifted verbatim from things that I have actually said. The book has a couple short stories, all of which are terrible things that actually happened to me, with my name crossed out and “an owl” written in its place. I drink a lot.

CBM: How many hits have you gotten since launch and how many submissions?

J.PB: Tumblr analytics are either really hard to figure out, or just hard enough for me to be too lazy to do so. As of today, I should have 45,000 followers, putting me right behind wordsdescribingsexythingsonaredbackground.tumblr.com

CBM: Blog to Book! Awesome! Can you tell me about that process? How are book sales coming along?

J.PB: I was contacted by an agent, who had a bunch of publishers who wanted to get their own blog to book thing while the blogging’s blog. I ended up working with the amazing-and-I’m-not-just-saying-that-cause-I-have-to folks at Abrams Image, who got me started on a bunch of short stories, some field guides, and owl mixology just to break up the book a little. Then I had to track down the photo rights for photos we already used (a hilarious and humiliating process), buy several thousand dollars worth of stock owl photos, and edit the shit out of things. It’s been on the stands for about two weeks, and I don’t know anything about the sales because the whole thing is too insane for me to process properly.

CBM: What’s a wild fact about owls that you can share:

J.PB: For the longest time, owls were considered the stupidest birds because of their difficulty to train. Further study has shown that stubbornness stems from their significant intelligence and solitary nature- unlock flock animals, if you yell at them for doing something, they just know that you’re a yelly asshole, not that they should do something different. I like any animal that demonstrates resentment.

CBM: What’s the best reason to be hungover?

J.PB: I was visiting family last weekend, and since they’re more than a tad on the religious side, I was sober the whole time. Even so, I woke up Saturday morning and still felt like shit.

CBM: Do you run any other Tumblrs? Funny Twitter accounts perhaps…

J.PB: Other than DigBoston, the site and print copy you should totally visit/pick up a free copy if you’re in Boston, I tweet from, of all things, @resentfultweet.

Read next: Google Voice currently being tested in Europe ahead of international launch