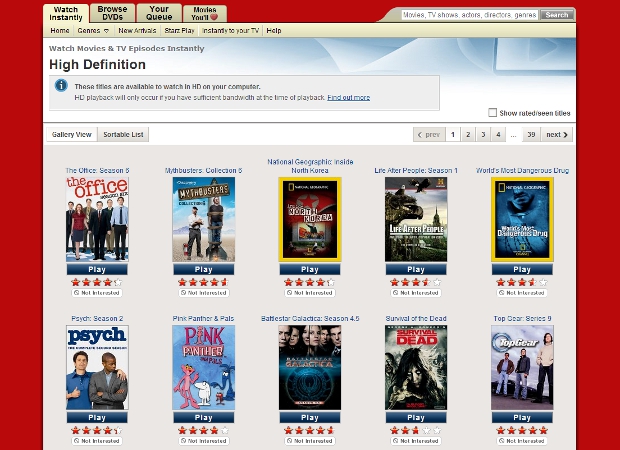 When Netflix launched its HD streaming section back in June, we were pretty impressed that the channel launched with over 650 titles. Fast forward four months (excuse the pun, it’s Saturday night), and Netflix has added about 500 new titles to its HD streaming inventory.

The exact total that we came up with was 1,144, based on 38 screens of movies at 30 movie each, plus one screen of 4 (though Netflix could possibly be throwing in some duplicates and/or non-HD content, we’re not sure).

Of course, this mix of movies and TV shows isn’t exactly filled to the brim with movies that you’d like to watch, but darn if the ones that you do want to watch don’t look great in 720p. That said, especially on the TV series side there is plenty to keep you HD engaged with, including Battlestar Galactica, 30 Rock, The Office and others.

This HD channel of Netflix’s is important for a number of reasons. First of all, all content on Hulu.com maxes out at 480p, so +1 for Netflix. Secondly, with all of the device integrations out there with Netflix (many of which point to users with hi-def screens and devices) those extra pixels go a long way. Also, the HD channel is a major play against premium cable and its HD (and especially on-demand) content.

Here’s hoping Netflix keeps expanding the selection, and hopefully at an even greater pace than the roughly 125 titles a month it has been adding since June.

Read next: Chinese social network Renren to merge with sister site Kaixin (no, not Kaixin001)