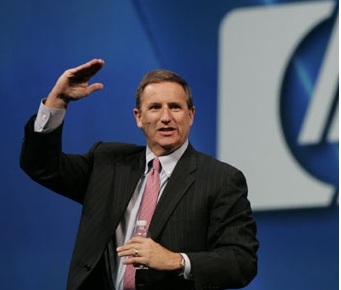 HP is suing Mark Hurd for violating the terms of his severance from HP. As you probably know, Mr. Hurd was the CEO of HP until the board forced him to resign amidst allegations that Mr. Hurd was using company money for some sort of an affair. He was then hired by Oracle yesterday, and it seems HP is none to happy about it.

Mr. Hurd signed a 24 month policy when he left HP, and in return he got a not-too-shabby $40 million severance package. Part of the terms of this deal were that Mr. Hurd not reveal any trade secrets for a period of 24 months. It will be very hard for Mr. Hurd to claim that he is abiding by these terms given that he’s now working at an HP competitor. As this suit is being filed in California where typical non-compete agreements are not enforceable, HP has filed this lawsuit as “breach of contract and threatened misappropriation of trade secrets.”

That said, Mr. Hurd and Oracle are probably going to argue that Mr. Hurd’s new job does not violate the non-compete. Most likely they’ll argue that Mr. Hurd was hired for his skills at cutting costs and increasing profits, which is a large part of why he was such a good CEO while at HP. If Mr. Hurd can sufficiently prove this in court, then maybe he won’t have to give back the yacht or mansion or whatever he spent that $40 million on.