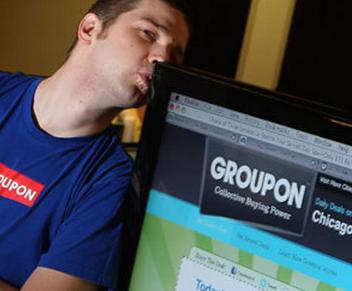 At today’s SocialDevCamp in Chicago, Groupon founder and CEO Andrew Mason took part in a very interesting question and answer discussion about the Chicago based company he runs. I’ve broken down the talk, to which I can not do justice due to its constant humor, into blocks for you all to enjoy.

For every non-Chicagoan, Groupon is our darling. We love that Groupon is doing as well as it is. It’s our home team, so don’t mock them and expect a warm welcome here!

Groupon Is Hiring Everyone

If you recall, many of the largest companies that we now depend on, Google, Facebook, etc, went through periods of massive, and massively rapid hiring. Groupon is doing that now. According to my hastily typed notes, Groupon is around 500 people strong, and is hiring some 30+ people a month. Mason said it emphatically: we are “hiring like crazy.”

At a later point, an audience member asked a question about the growing, but still adolescent startup and technology scene in Chicago. Mason said that if you want to help Chicago, put your startup on ice for a few years and come work for Groupon. The audience chuckled. At the very beginning of the talk, he asked the room (by far the most packed event of the day), if anyone was an engineer. He blinked at the hands and said “come work for Groupon.” Like any good question and answer session, a great deal of numbers, figures, and claims were bandied around, some from Mason, and some from the media. Some highlights:

The Product In Numbers

Groupon, and its hundreds of spawned clones, have hit a market nerve. Their product, a “hybrid of local advertising, and local commerce,” according to Mason, is riveting corporations in the 88 US cities and 26 countries that Groupon operates in.

For every 7 businesses that approach Groupon, 6 are turned away. This has created something of a capacity bottleneck for the company, and provides some ammunition to their competitors. Some 700 businesses approach Groupon every day.

To combat the leak of 6 out of 7 approaches, Groupon is working on greater personalization to allow it to target certain users with specific deals, thus allowing them to handle more total deals per day. More, better targeted business, and less food for the competition is the Groupon plan going forward.

Local is the big deal for Groupon: 90% of the Groupon deals in Chicago are withing 5 miles of the Loop (our downtown area). Even more, 80% of people’s money using Groupon is spent within 10 miles of their home.

Aside from the interesting business dialogue, Mason is rather quotable, bringing the audience to both applause and laughter several times during his hour on stage. Some of my scribbled favorites:

That in a nutshell wraps up what Mason said, with a few things that I could not write down quickly enough. Who will catch Groupon?

Image credit, @JeffHuber. A big thanks to the #SSDChi for inviting TNW to attend.