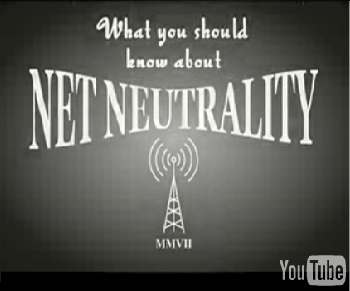 Professor Lyons’ argument rests largely on the principle of eminent domain. Going back pretty far in American legal precedent, it’s been established that if the government takes private property for public use, then the holder of the private property must receive “just compensation.” An example of this would be if you owned 50 acres of land and Uncle Sam wanted to use it to set up a public college. In order to take this land from you, the government would have to pay you at a competitive rate.

Where this applies to net neutrality is that the physical infrastructure of the internet – the copper and fiber-optic cabling – is the private property of the ISPs. By enforcing principles of net neutrality, such as requiring a provider to allow any sort of traffic on its network, the government is in effect removing some of the provider’s rights as a property holder. One of the principles of owning property is that you have the right to exclude – it’s yours, so you get say (at least to an extent) as to what it can be used for.

Where This Falls Short

But there’s a caveat for net neutrality: internet service could become a utility. Unlike pretty much all other private services, utilities are subject to all sorts of regulations, many of which are very similar to what we all want of net neutrality. For example, a power company cannot intentionally not provide you electricity because they don’t like the brand of refrigerator you own. This is analogous to how Comcast and other ISPs want the right to throttle bandwidth to P2P applications such as BitTorrent clients (which, by the way, do have legal uses).

In fact, there’s a very strong argument to be made that internet service should be reclassified as a utility. My favorite is that ISPs are arguably natural monopolies just because the cost of rolling out infrastructure is so high. Once ISP A has set up shop, it’s very hard for ISP B to come in and price competitively, if only because ISP B needs to charge enough for service to cover the costs of putting its shovels to the ground and laying down wire.

The simpler argument to make is to invoke the Interstate Commerce clause of the Constitution. Since the internet very clearly a part of interstate commerce, the feds can regulate it pretty much any way they want. Most circuit courds would probably rule this way, so it’s hard to imagine any case invoking the Fifth Amendment even making it all the way up to the Supreme Court.

Still, We Have A Problem

Right now, internet service in America is not a utility, nor is it even as pervasive as it should be. Unlike other parts of the world which have deemed broadband access a legal right, America is pretty behind in its broadband penetration. And even in major cities, on average American internet speeds are slower than places in other parts of the world.

The government’s real task regarding internet is to get more infrastructure laid and to get more people online. Constitutionality is far from the most pressing of issues.

Read next: Lack motivation? The adidas miCoach app will whip you into shape.