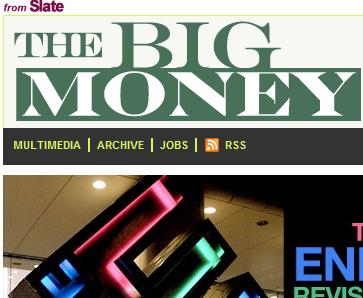 When Slate launched ‘The Big Money‘ it seemed like a feasible idea, but it has never lived up to its promise. After two years of losing money, and with no quick map to profitability, Slate is pulling the plug.

Many expected the halo effect of Slate’s larger market brand name as a leader in online media to propel the site to success, but it seems that perhaps it became lost in a crowded financial news space. The push from Slate was not a big enough pull for the site to hit its stride.

When The Big Money launched, it did so in the midst of financial turmoil which has subsided somewhat. Perhaps the drop off in front page news was the final blow to the small site. As of this moment, there are still job listings for The Big Money on Slate’s employment page, what that means remains to be seen.

Read next: Jacket Crowdsources Out Your Stress, Then Massages You