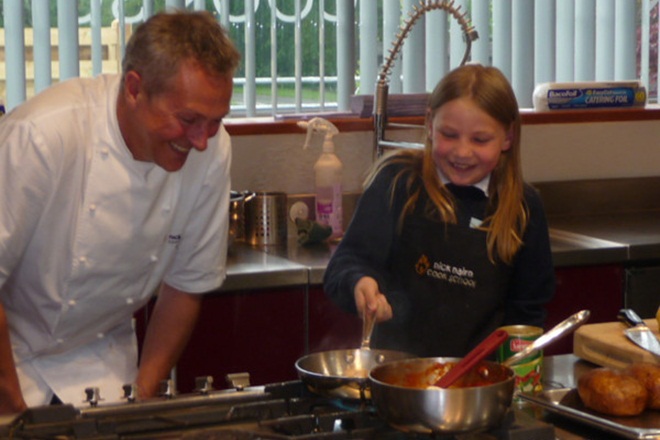 UPDATE: The ban has now been lifted.

A nine-year-old British school girl has had her popular blog about school food closed by a local council. Martha Payne, a primary school student in Western Scotland, began posting photos of her school dinners with commentary in May and today ‘Never Seconds‘ passed more than 2 million page views.

The site became more than just her school lunches, as Martha included photos and stories sent to her by readers from across the world. Upon realising that the site had become popular, Martha channelled the attention positively and began to ask readers to contribute towards her target of a £7,000 donation to Africa school food charity Mary’s Meals.

Updated below: Martha’s charity has passed its target after seeing more than £5,500 in donations in less than two hours.

Writing her goodbye entry, Martha — whose pen name is ‘Veg’ — explained that she had banned from bringing the camera to school following media coverage of the blog:

This morning in maths I got taken out of class by my head teacher and taken to her office. I was told that I could not take any more photos of my school dinners because of a headline in a newspaper today.

I only write my blog not newspapers and I am sad I am no longer allowed to take photos. I will miss sharing and rating my school dinners and I’ll miss seeing the dinners you send me too. I don’t think I will be able to finish raising enough money for a kitchen for Mary’s Meals either.

Martha is the sole contributor but her Dad, Dave, stepped in to add a little extra context, explaining that the school was following orders from the council:

I felt it’s important to add a few bits of info to the blog tonight. Martha’s school have been brilliant and supportive from the beginning and I’d like to thank them all. I contacted Argyll and Bute Council when Martha told me what happened at school today and they told me it was their decision to ban Martha’s photography.

It is a shame that a blog that today went through 2 million hits, which has inspired debates at home and abroad and raised nearly £2,000 for charity is forced to end.

Wired’s Maryn McKenna calls the move to prevent Martha’s blogging “monumentally stupid”,  and we can only echo those sentiments.

In an era when many worry about what children eat (and, more importantly desire on their plate) and fuss over a generation that is accused of being short on attention and poor on grammar, Martha’s blog is an overwhelmingly positive example.

She had the media, and most importantly parents and kids, talking about the important issue of school lunches, and her blog even kickstarted her school into introducing an ‘unlimited salads, fruit and bread’ policy.

It’s quite obvious that the blog caused the local authorities to make changes to the lunches, such was the poor quality of them initially.

Here’s what was served up on May 8:

As her posts continued, so the quality of the food improved significantly, and this was lunch on June 6 – less than a month of photos later:

In one entry, Martha explains that the members of the council came to the school to introduce an improved menu:

Today was very different at lunchtime. Dad had already told me beforehand that some people from the Council were coming to lunch with a reporter from our local paper. There was also a new system for ordering food which I’ll explain when I understand it more. I didn’t see the visitors having lunch but I saw them hovering about and watching us getting served.

We’ve contacted Argyll and Bute Council for comment, although they have not yet released a formal statement of any kind explaining exactly why Martha is being silenced from the ruling.

The story has gained plenty of attention and one plus has been that donations for Mary’s Meals passed £2,000 since the final entry, with the total figure now sat at £2,708.20, at the time of writing.

It remains to be seen if more attention can see Martha hit her £7,000 target.

Update: It’s been less than two hours since our post, and Martha’s JustGiving fund has now passed its target and gone on to hit £8,377.90 – that’s an increase of more than £5,600. It will be interesting to see if the reaction to the news can continue to drive the donation total higher still – particularly as both #neverseconds and ‘Martha Payne’ are trending on Twitter in the UK.

Update 2: Argyll and Bute Council has just published a statement on the matter:

Argyll and Bute Council wholly refutes the unwarranted attacks on its schools catering service which culminated in national press headlines which have led catering staff to fear for their jobs. The Council has directly avoided any criticism of anyone involved in the ‘never seconds’ blog for obvious reasons despite a strongly held view that the information presented in it misrepresented the options and choices available to pupils however this escalation means we had to act to protect staff from the distress and harm it was causing. In particular, the photographic images uploaded appear to only represent a fraction of the choices available to pupils, so a decision has been made by the council to stop photos being taken in the school canteen.

There have been discussions between senior council staff and Martha’s father however, despite an acknowledgement that the media coverage has produced these unwarranted attacks, he intimated that he would continue with the blog.

The council has had no complaints for the last two years about the quality of school meals other than one from the Payne family received on 6 June and there have been no changes to the service on offer since the introduction of the blog.

Pupils have a daily choice of two meals from a menu which is designed with pupils, parents and teachers. Our summer menu is about to be launched and includes main course choices like meat or vegetarian lasagne served with carrots and garlic bread or chicken pie with puff pastry, mashed potato and mixed vegetables.

Pupils can choose from at least two meals every day. They pay £2 for two courses and this could be a starter and a main or a main and a desert. Each meal comes with milk or water. Pupils can have as much salad and bread as they want. Salad, vegetables, fruit, yoghurt and cheese options are available every day. These are standing options and are not a result of any changes in response to the blog site.

As part of the curriculum for excellence, pupils in all our schools are regularly taught about healthy eating and at lunch breaks staff encourage pupils to make good choices from what is on offer. We use a system called ‘Nutmeg’ to make sure everything is nutritionally balanced. Our staff also get nutrition awareness training so they know how to provide a good healthy meal. There is portion sized guidance which we adhere to and it is matched to the age of the child so they get the right amount of food. Second portions would mean too many calories for pupils.

In Lochgilphead Primary School we are piloting a new pre-ordering scheme which is designed to encourage class discussion around meal choices and also improves the accuracy of meal choices. The pupils use a touch screen to select their lunch option and the data is downloaded in the kitchen so they know how many portions of each meal are required. As they place their order, the pupils are given a coloured band which relates to their meal choice that day. They wear it during the morning, and at lunchtime they hand it to the catering assistant, who will give them the corresponding meal.

The council’s focus is now on supporting the school in the education of young people in Argyll and Bute.

Update 3: The ban has now been lifted.

All images via Never Seconds

Read next: MusiXmatch now lets you search for songs and build Spotify playlists based on lyrics