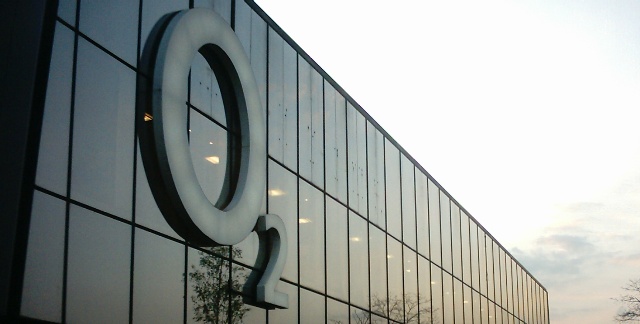 Back on Wednesday, we revealed that UK mobile phone operator O2 was sending its users’ mobile numbers to every website they visited from their phone.

Whilst the network acted swiftly to get to the root of the problem, O2 actually ended up exceeding the daily tweet limit permitted by Twitter, as it sought to allay customers’ fears that their personal information may be compromised.

As New Media Age reports, at London’s Marketing Week’s 1-2-1 Digital Strategy Summit yesterday, O2’s PR and social media campaigns manager made the revelation, as the company attempted to stay on top of the influx of tweets it was receiving enquiring about the issue – indeed, O2 actually accrued the same amount of ‘mentions’ on Wednesday as it does in a normal week.

@acp Hi Andrew, we’ll be answering all questions on our blog post located > j.mp/MPNblog Please post any queries you have there.

O2 eventually wrote a blog post explaining what the issue was, how it happened and what had been done to fix the situation. In terms of why limits are in place, Twitter says:

“Limits alleviate some of the strain on the behind-the-scenes part of Twitter, and reduce downtime and error pages. For the sake of reliability, we’ve placed some limits on account actions like following, API requests, direct messages, and updates.”

Twitter accounts typically have a limit of 250 direct messages a day, and 1,000 tweets. “The daily update limit is further broken down into smaller limits for semi-hourly intervals. Retweets are counted as updates,” adds Twitter.

The original issue was brought to our attention earlier this week by Lewis Peckover, who created a simple webpage to check the information that a mobile browser would send to a website when it requested data. Whilst most of the data was to be expected, including the Host, User Agent, Referrer and Encoding, there was also another field in the results — x-up-calling-line-id. What is x-up-calling-line-id? Your mobile phone number. 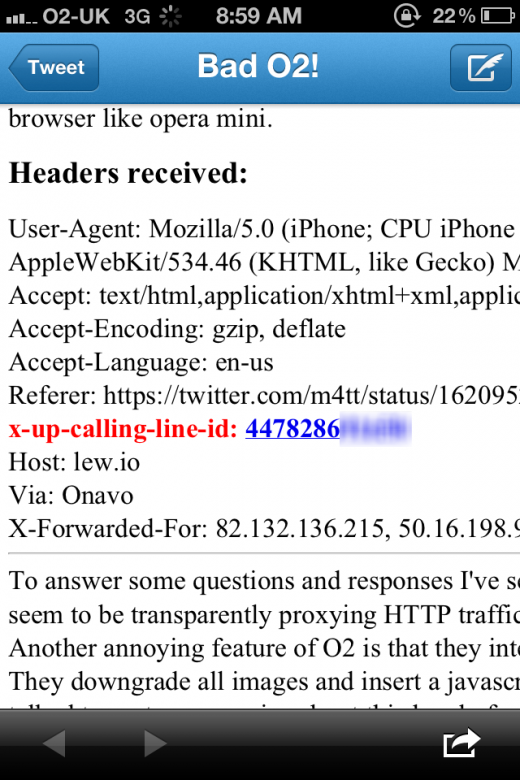 We tested it on an O2-connected mobile device and received the following results (number blurred for privacy).

Whilst the incident wasn’t likely to lead to users’ being individually identified, we did note in a separate post that the issue could allow spammers to conduct targeted phishing scams on unsuspecting users.

O2’s social media man said at the event that it was important that O2 didn’t “stay quietly in [its] shell,” which evidently resulted in it hitting its tweet limit.

“We wanted to respond to as many people as possible with fair answers,” said Paterson. “In the past, we may have just given a Q&A in the well-known media outlets, but our people understand that if you answer queries and communicate to people on social media straight away, problems tend to be resolved faster.”

This is an interesting case for sure. Whilst Twitter wasn’t designed as a customer service channel, it is becoming a default platform for customers to communicate with companies. And given the very public nature of it, companies have to try and respond as well as they can.

Can we expect to see companies pay for larger tweet allowances in the future? I certainly wouldn’t rule it out.

Read next: Is it time to say 'goodbye' to Siri?