When I saw this message from Amazon in my Twitter stream yesterday, it was like being transported back to 1980s Britain. Could it really be – Subbuteo – making a comeback? It seems so.

Subbuteo is back. The new, improved Subbuteo game is now available to pre-order at Amazon, amzn.to/ypQFnj

For non-UK readers, or those too young to remember, Subbuteo was a hugely popular pastime constituting a set of table-top games such as football (soccer), cricket, rugby and hockey. However, it was the football version that proved particularly popular.

It was launched back in the 1940s and continued to grow in popularity right through to its peak in the 1970s and 1980s, 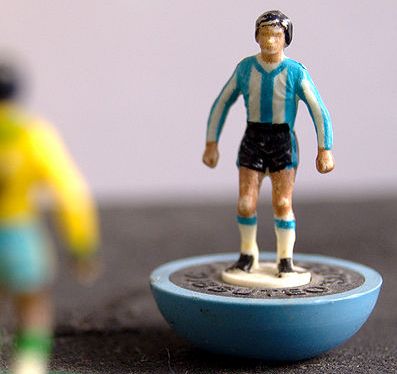 before finally being pulled from the market in the late 90s. It essentially consisted of a mini replica football pitch made from cloth, and two teams of players held in place by weighted bases. You then flicked the player towards the football to score a goal…unless your friend managed to save it with their mini goalkeeper, of course.

So, in the same month that Manchester United midfielder Paul Scholes hung up his slippers and ended his short-lived retirement from the beautiful game, the iconic flick-to-kick football game has announced its own comeback, fifteen years after it was discontinued. But I fear the worst for it.

Personally, I was never a huge fan of playing the game itself. I just loved how you could build your own miniature football stadium in your bedroom, replete with floodlights and everything that goes with it. Subbuteo made a lot of money out of me as a kid, especially given that I didn’t play it all that much.

But alas, this is all a very convoluted way of getting ’round to the main question this raises. Can an analogue touchie-feelie game that belongs to a bygone era really compete with the Playstations of the world? Part of me thinks this could be a marketing man’s ill-conceived notion of a ‘good idea’, but I’m guessing they must’ve carried out some market research to launch the product again.

A local newspaper ran an interview with Peter Rooke yesterday, who’s brand licensing director at Paul Lamond Games which makes Subbuteo. He thinks it offers a more social alternative to computer games. “It’s a real family game, dads and sons can play it together, and it’s also got the nostalgia factor,” he says. “The main change is that the detail and quality of the figures is much better now.”

Still, I don’t think the problem before was ‘detail’ or lack of quality in the figures. My initial thoughts on this was it was a move motivated entirely by nostalgia, which is never a good idea.

The game is available for pre-order on Amazon UK now, with shipping beginning in early March. I do, however, think they missed a very big trick by not releasing this in time for Christmas, as it would likely have been on many thirty-somethings Xmas wishlist.

The relaunch seems to be focusing specifically on the English Premier League to begin with, and it promises “new and improved swerve, slide and balance”. The product description reads:

“Subbuteo is one of the world’s most iconic sports games and after 15 years off the shelves;this legendary game is back.

Fans of all ages will love the new re-energised Subbuteo range with greatly improved detail. No longer will players need to be glued back together having broken from the base yet again – the new players are so strong and flexible. A new and improved pitch means your teams will never have moved so quickly and accurately. With unparalleled detail;stronger and more flexible players you can now dazzle everyone with your skills. Pick your team;decide your game plan and victory will be at your fingertips! A strong range of fully licensed Premier League Subbuteo teams are available including Manchester United; Chelsea and Liverpool.”

With the likes of FIFA Football available across a range of consoles and handheld devices, does Subbuteo really think it can reclaim a place in the nation’s heart once again? I initially thought ‘definitely not’, but then I read something that suggests it could at least stake a claim.

Rooke added that the company is considering launching a digital version of Subbuteo for tablets and smartphones, so it might not have to worry about targeting kids after all. Back in December, we reported that Angry Birds on Android was most popular in the over-35 age-group, so nostalgia mixed with a well-designed app could see Subbuteo make a permanent comeback this year. But I don’t think Playstation really has too much to worry about. Now where did I put my Slinky…

Read next: How O2 could unwittingly help spammers conduct a nasty phishing campaign