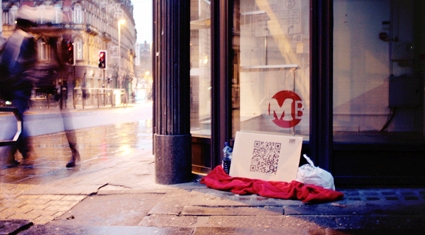 Leeds-based creative agency Propaganda helped homeless charity Simon on the Streets this Christmas, launching a very interesting QR code campaign to help raise funds for those sleeping rough on the streets of Yorkshire in the UK.

Rather than sending Christmas gifts to its clients, the agency laid out QR codes printed on cardboard and positioned them amongst blankets and belongings, to replicate the outdoor dwellings of homeless people.

The installations were situated around Leeds city centre, and once scanned by a smartphone or tablet QR code reader, the user was taken to a JustGiving page to donate money directly to the charity.

So, why not just donate directly to the people who are sleeping rough on the streets? Propaganda explains in a blog post:

“This new way of giving is instant and above all safe: ensuring anyone sleeping on the streets gets the food, shelter and support they need. This is preferable to donating directly to a homeless person because, as Propaganda discovered from working with Simon on the Streets, these cash gifts often contribute to a much wider drug or alcohol-related problem.”

Whilst Propaganda donated £1,000 to the charity itself, you can also still donate yourself here.

Read next: A Finnish ISP has blocked The Pirate Bay following a court order