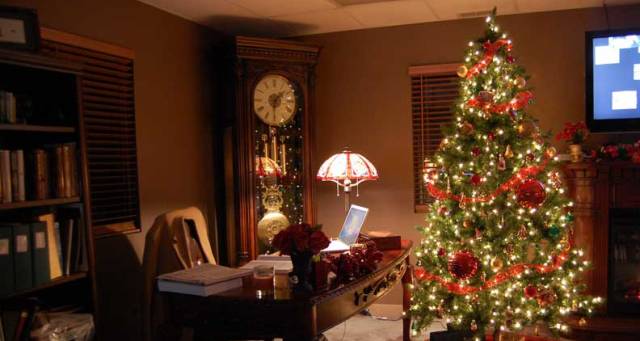 Well, it would seem a trifle rude to not begin proceedings with a warm ‘Merry Christmas’. But I must ask…what the hell are you doing reading this when you should be playing your new Nintendo 3DS, or guzzling that tenth mince pie of the day?

But then, you will probably ask what the hell am I doing here writing this piece on the holiest of holy-days. My excuse? I love what I do, so it’s not like I’m really working per se…plus, I actually prepped much of it yesterday. And your excuse is likely along the lines of “I love all things tech, why would I switch off just because my calendar says ‘December 25′”? Fair point.

Confucius once said: “Choose a job you love, and you will never have to work a day in your life.” Nice sentiments for sure, but there’s still the issue of a healthy work/life balance to contend with – even for startup founders.

So I asked a handful of founders and CEOs whether they would be working on Christmas Day this year, or whether they’d treat themselves to a day off. I mean, it is a Sunday after all…

“The all important pivot might come to you while you’re playing twister with your grandparents.”

“Hmm…it depends”, he says. “In my honest opinion, the notion that the best founders work 24/7 is an utter myth. Good startups with product/market fit create a volume of work, since you can’t hire fast enough to cope with consumer demands and the issues that demand generates. You’re also inundated with press, legal, investor, HR and other requests. So founders that work 24/7 out of necessity have normally hit upon a winning idea – some observers make the mistake of seeing it the other way around, namely that hard-working founders create product/market fit companies.”

“If it’s you creating the work, and not the company, then you are not at product/market fit stage”, he adds. “If you work on Christmas Day – unless you hate Christmas, which, I guess then is fair enough – then you better believe 100% that the work you’re doing is going to be the thing that makes the difference. If you don’t then you are getting in the way. So get out of the way, eat turkey and pull a cracker. The all important pivot might come to you while you’re playing twister with your grandparents.”

UK entrepreneur Rich Martell is still in his early twenties, but has already released three location-based apps this year. It’s full-steam ahead for his company Floxx, but surely Rich will be taking a breather for Christmas Day?

“I definitely will be working”, he says. “I tend not sleep too well when Santa is on his way, so will likely be up. I also find Christmas – not just the day itself, but the whole period – a great time to catch up on work. I’ve got a load of things to catch up on, such as emails, accounts and shareholder reports.”

ShareMyPlaylists has been covered a few times during 2011, most recently when it announced the top 100 most playlisted Spotify tracks during the year.

“I’m a firm believer in a healthy work/life balance, but unfortunately running a startup means that as much as I would like to, I can’t just switch off the PC and sit down with mince pies and sherry,” says Founder Kieron Donoghue.

“Because ShareMyPlaylists.com relies on user-generated content, it means that we have to constantly monitor the site to both ensure nothing unsavoury gets through, but also that the good content is highlighted and showcased to our users”, he continues. “We have filters and checks in place but nothing beats human curation. So I won’t be pulling a normal working day by any means, but the PC will be switched on and running in the background, as I watch the Christmas Top Of The Pops special.”

It’s been a busy year for Buffer, as the company has rolled out a series of new features for its tweet-scheduling service, the most recent being the launch of a native iOS app. And what will company co-founder Leo Widrich be up to today?

“As a native Austrian, Christmas is slightly different for me”, he says. “We celebrate on the 24th, in the evening, and not on the 25th. So this means I will have a bit of time in the morning, where I plan to work on support emails and tweets. Whilst I believe taking a few days off is a fantastic thing to do, I just believe giving our users the most outstanding customer service comes above everything else. And fortunately it is always a lot of fun to chat with the awesome people using Buffer.”

Lutebox is a social entertainment hub which launched in alpha back in September. I asked founder Ali Ahmed if he planned to work on December 25th.

“Most likely, since half the team are offshore and won’t be celebrating Christmas”, he says. “Also, at this stage in our lifecycle, every day counts. We knew early on that by committing the next few years of our lives fully to Lutebox, we’d have to make sacrifices, but hopefully ones that would pay off significantly later on.”

AssuredSale is setting out to disrupt the UK housing market, as we reported back in October, so is founder Tim Price taking some time out from his efforts, or is he ploughing on through this Christmas Day?

“It’s been a real busy year, from idea through to launch, and I do really need some down time”, says Tim. “When I was working for a company, I would always book at least a week off, maybe even two. But that’s not going to happen this year though – at best I will work around having time off with the family, maybe grab an odd hour before they get up, and an hour in the afternoon. Of course, this doesn’t include checking the iPhone or Skype  during the day!”

“In terms of Christmas Day, my view is there should be no need to work”, continues Tim. “It’s  a special family day and, with my two children being under 5-years-old now, it’s a magical one too. However, we are going to the in-laws this year and as I usually cook when home, I will have some time to spare. So my plan is to take the laptop down in case something does jump into my head – I never really switch off in this startup – but I also have an idea to use the Christmas Day family gathering.”

It seems that Tim will indeed be putting the Christmas family gathering to good use too, and he has some impromptu focus group testing in store. “Dan, our CTO, has been reworking the user experience and look and feel of our V1 application, based on pilot feedback and SUE (Single User Experience principles)”, he says. “And wow, does it look good now! So, I am going to use all the family to test it out – what their first impressions are, can they sign up easily, do they understand it without needing to use the help feature, what do they like, what don’t they like. Family is great for this, as they could be our customers and as they are not as close to the application as I am, so…”

People-powered news service Blottr has gone from strength-to-strength this year, and the last time we caught up founder Adam Baker, he was launching the platform internationally. So…no rest for the wicked?

“News happens 24-hours a day, without regard for time or circumstance”, says Adam. “The team and I will be on call right through Christmas, making sure when breaking news occurs that Blottr is the first to cover it. We’ll most likely be wearing Santa suits with a glass of sherry in-hand as we work, though!”

Teamer, the sports club management platform, recently hit 1 million users and is growing fast. With that kind of user-base, it clearly calls for all-hands-on-deck. But what about Christmas?

“Not a chance”, says CEO Niall McEvoy. “My family haven’t seen much of me in the last few years, an unavoidable downside of entrepreneurship, so Christmas Day – and the few days after – are for eating, drinking, and being merry.”

Elsewhere in the startup sphere, Peter McCormack from Bantr, the football social network, says he will be working a little: “I’ll just be keeping an eye on the product and what people are doing.” Whilst Jasper Westaway from Microsoft Office collaboration tool OneDrum, says: “I won’t work, but I can’t stop myself thinking about or reviewing various aspects of our business in my mind.” And Alex Chesterman, founder and CEO of Zoopla, the UK property listing service, says: “Given the 24/7 nature of our business, we will have staff working on Christmas day. The internet never sleeps!”

But it seems there are other factors that will affect whether company founders will be working on Christmas Day or not. Alexis Dormandy from LoveThis.com, a platform that lets you garner recommendations from people you trust, says he might work today, but for one potential big event: “It rather depends on whether we’re having a baby or not.”

For those choosing to take today off, well done, you’ve earned it. For those working it…just make sure you clock-off early, yeah?

Read next: The Best Places in the World to be on New Year's Eve