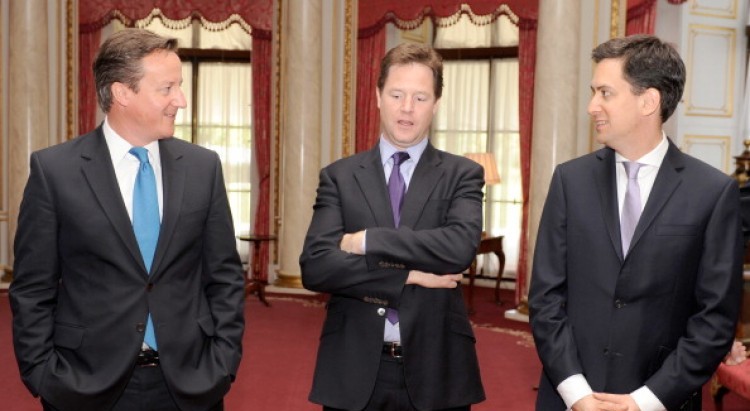 On the same day we reported that Twitter, Facebook and RIM were being hauled in front of the UK government again to discuss the recent UK riots, it transpires that three of the UK’s top politicians have all joined Google+.

As the FT reports, Prime Minister and Conservative party leader David Cameron, Liberal Democrats leader and deputy Prime Minister Nick Clegg and Labour party leader Ed Milliband all signed up to Google’s social network today. And here’s what they each had to say in their inaugural posts:

“Proud to see British politicians leading the way when it comes to embracing new methods of engaging people online, from e-petitions to the latest developments in social media.”

“The Liberal Democrats are always open to new and innovative ways of communicating with voters, so creating this Google+ account was an easy and logical step.”

“Welcome to my page on Google+.

I have said since I became leader that I am determined for Labour to look outwards, not just inwards. So I am looking forward to using this site to keep in touch with people who follow me here.

Let me know what you think.”

It’s not clear whether each politician personally signed up to the social networking service, though it’s probably safe to assume that each account was set up on their behalf by their respective parties.

Google+ launched back in June, and it reached 10m users within 16 days, and it’s thought it has over 25m registered members today.

With the leaders of the three major UK political parties jumping on Google+ at the same time, Google will avoid criticism that it’s a little too close to the Conservative party – Eric Schmidt, Google’s executive chairman, is an economic advisor to David Cameron, whilst the search giant’s communications head Rachel Whetstone is married to Steve Hilton, who just happens to be Cameron’s director of strategy.

Given that Google hasn’t yet opened its social network to brands or organizations in the same way as Facebook has with its Pages for celebrities and businesses, these are very much ‘personal’ profile pages, though only time will tell how much personal input the respective politicians put into their pages. Indeed, it will be interesting to see how active each leader will be on Google+, or whether their initial interest in the social network will dwindle over time.

Read next: Microsoft serves up 500K downloads of Windows 8 Preview in under 24 hours