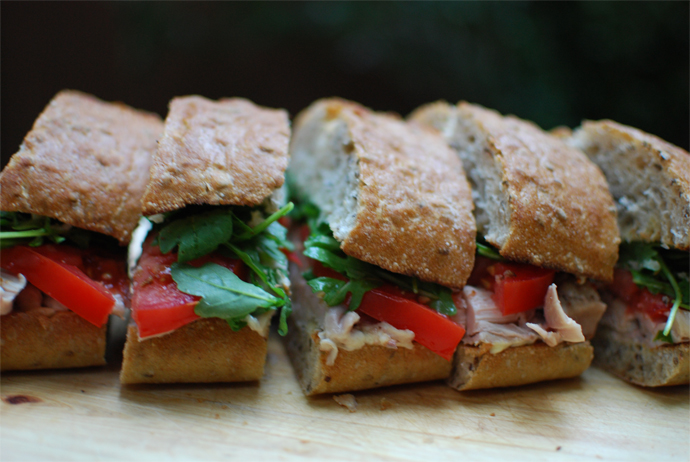 London has no shortage of eateries, but knowing where to go for that perfect sandwich isn’t all that easy if you find yourself in an unfamiliar part of the city. However, this is one quandary this app tries to solve.

Best Sandwiches London was released yesterday, and it’s compatible with iOS 4.0 devices and above. As its name suggests, the app will enable Londoners to locate and rate the best sandwiches across the city – but there’s more to it than that…it’s curated.

The app was the work of Duane and Natalie Kinsey, founders of an Australian design studio called Logobird. So why would two Aussies wish to release a culinary app aimed at the UK capital? Duane explains:

“In April, we moved from Australia to London, to experience life in the UK. During the transitional period of the move we decided to give ourselves some time off client work, and shifted our focus to personal projects. The first of which is Best Sandwiches London. We designed the user interface ourselves, then worked with an outside developer to do the coding.” ompany set up by Duane and Natalie in the UK, called Pixel Chirp Ltd. Logobird is still very much focused on branding and will remain registered in Australia.

The data for Best Sandwiches London was curated by the couple, and the foodies spent 4 months researching cafes, restaurants and markets across the city. They began by following the recommendations of friends and popular food blogs, then after compiling a shortlist, they took to the streets to sample the sandwiches for themselves, with literally hundreds of sandwiches consumed in the process. Duane says:

“There are already apps out there that allow you to make food choices choices based on user reviews and location, however we have always found the recommendations to be hit and miss. Being a curated app, users know that the recommendations can be trusted and that there are real quality standards being maintained.”

At the time of writing, the app contains almost 60 sandwich destinations, predominantly selected from independent cafes and markets.

The criteria used to identify the best sandwiches included freshness of ingredients, quality of the bread, and overall taste/experience. So that means no prepackaged or supermarket sandwiches made it into the app.

And as with any smartphone app worth its salt, the power of GPS is harnessed to help users navigate directly to any of the sandwiches listed in the app.

The one downside is that the Best Sandwiches London app isn’t free – but it is on sale in the App Store for a palatable £1.49. And if you don’t have an iOS device, I’m told that a version for Android is in the pipeline.

Whilst the app contains around 60 gourmet sandwich outlets just now, that number should rise as they find and review more sandwiches. Plus, users can submit suggestions to them via the app, or through the website. There is also the prospect of adding more than one sandwich for each eaterie. Duane says:

“We have the ability to add sandwiches to the app through the back-end interface at anytime, without releasing a version update. So, once a sandwich has been approved, adding it to the app is literally a 5 minute job. Users will get the update instantly.”

You may be wondering how difficult it was researching for this app. Well, as it turns out, it was no hassle at all. “While it was very time consuming, we are both massive foodies”, says Duane. “So I wouldn’t call it hard work.”