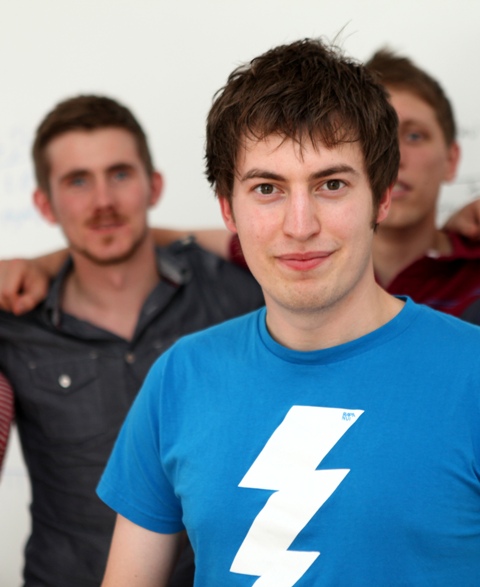 What started as a $5k side-project turned into more than English film-producer Bertie Stephens had originally bargained for.

Two months after a misunderstanding during a chance meeting with a stranger, Stephens’ startup was sitting on a $1m investment and a $4m valuation. Here’s the story of Flubit.

Flubit is a platform that will attempt to change the face of buying online. It plans to empower the consumer to bring down prices, and its sole goal is to “provide online shoppers with a platform that will enable them to seek out the best possible price on an item they wish to purchase.” Not another Groupon wannabe, surely?

The company may currently be of a modest size, but one of its bold ambitions is to take on one of the most talked about Web companies in recent times. But its model will be different to Groupon – it claims to have created a sustainable business model.

The premise is that daily deal websites such as Groupon, Living Social and KGB look good from the outside, but on closer inspection they’re “one step short of evil”, says Bertie.

There are some great deals to be had, but with retailers having to pay anything up to 50% in commission, sometimes more, the retailers don’t care too much for the customers when they show up with large smiles displayed across their faces. And this is where Flubit aims to save the day, with a much more palatable offer for retailers.

With Flubit, users say what they want to buy, Flubit groups these users together by product type, and the relevant retailers are automatically informed. This allows retailers to sell in volume (at a discount) to targeted, online consumers. Flubit takes from 2.5%-6% in commission.

The birth of Flubit “I originally thought of the idea in February 2010”, says Bertie. “I wrote an initial plan but didn’t do anything with it – this was before the ‘group buying’ frenzy had really caught on in the UK.”

But it wasn’t until around mid-October 2010, during a bout of birthday-blues, that Bertie really decided to go for the push as the daily deal sites were catching on. “So I started developing the idea further outside my work time”, he says. “I developed a business plan, then in the Spring I met the first investor.”

Stranger in the night

Bertie’s then colleague, Adel (who has since become a founding partner in Flubit), had a chance encounter with a stranger who mentioned he was “looking to invest in something”. Adel mentioned Bertie’s Flubit idea, and before he knew it Bertie was off to a meeting that evening with a man he’d never even heard of before.

The French businessman was based in South Kensington, London, and part of the half-hour pitch entailed more than a few financial questions. How much did Bertie need? “$5,000 to build the website framework”, he retorted. At the end of the meeting, the mysterious Frenchman stood up, shook Bertie’s hand and said that $50,000 wasn’t much money for the idea they’d discussed.

“I must admit I did walk away wondering if I should have corrected him or not”, said Bertie. “But tomorrow came and we were able to move forward with an initial $50,000 investment.”

Two weeks later, Flubit was offered $500,000 from an outside investor, but they turned it down in the hope of securing more cash.  “From there, I left my job and worked for about two weeks in my spare room”, says Bertie. “Within 2 months, our investment was up to $1m. It’s been a bit of a whirlwind.”

In that two-month period, Bertie had become CEO of Flubit.com, gained $1m in funding from four Angel investors and secured offices in London’s Silicon Roundabout which will house more than ten employees. After the first round of funding, Flubit was valued at $4m, according to Bertie.

That’s about as ‘whirlwind’ as any startup gets.

Flubit also brought on board Patrick Perez, a man who worked with Steve Jobs in launching Apple in Europe back in the 80s. Perez says:

“Itʼs very rare you come across a groundbreaking concept that has the ability to create a completely new market platform. I couldnʼt say no, we believe weʼre inventing the Social Commerce Marketplace – or Flubiplace as we call it in the office.”

FlubLite launches at the end of July, and this beta version will be the precursor to the site’s main launch which, if all goes according to plan, should be at the end of August.

“We’re a strong believer that we’re only as good as our users tell us,” says Bertie. “And it’s for this reason that we need to start learning how our system works with them. Our main aim is to build demand with FlubLite. With that small demand, our ‘Small Demand Team’ will help retailers in putting up the offers.”

What level of demand can Flubit expect to see? “We ran a survey for a selection of members and had a 1/6 response rate (about 2000 responses)”, says Bertie. “This has helped us determine what products should be discounted from day one. We are already knee-deep in getting these ‘Flubs’ set up.”

With a few weeks to go until beta launch, Flubit has already secured over 10,000 sign-ups, a deal with fashion outlet Hawes and Curtis, and many more in the pipeline. But Bertie isn’t living the high-life just yet.

“Weʼre building a flubtastic team here in London, some really flubulous guys”, says Bertie. “But Iʼm still living out of a backpack, sleeping where I can. Last week I stayed with a random (but lovely) Turkish couple in West Ham, and before that in some Youth Hostels in the Kings Cross area. The money is being spent on the company at the moment.”

Whether Flubit goes on to strike Groupon down with its flubby little fist remains to be seen. After all, the online discount space is very crowded. But it has been a remarkable growth story for Bertie and Co, so watch this space – you could be hearing a lot more from these guys in the future.

Still not sure exactly what Flubit is? Check out the startup’s official promo video here: