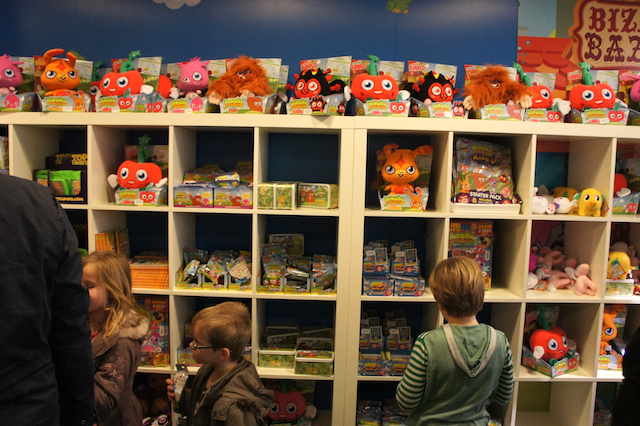 Moshi Monsters the social network for children that allows them to nurture and build environments for the their Moshi Monster “pets” yesterday launched a pop-up store in Whiteleys shopping centre in London’s Queensway.

The opening of the pop-up store sees the insanely popular virtual brand moving into retail, engaging with the young children that have helped grow the network to over 35 million users, with one user joining the site every second. Late last year, the brand announced it would be apps and gifts, helping it “break into the real world”.

The tiny store of about 30 square meters opened at 11am with queues of children and parents going right around the first floor where the store is located, well over a thousand kids were expected to visit the store over the course of the day. There were two full sized monsters (Poppet and Furi) who were walking around Whiteley’s so kids (and adults) could have their photos taken with them.

Michael Acton Smith, CEO of Moshi Monsters’ parent company Mind Candy) was there signing autographs as “Mr Moshi” to the delight of the children (and a mother got him to secretly autograph her arm).

The store was so busy, people had to be let in a few at a time to view the range of Moshi Monsters, Moshlets and other Moshi goods that were available.

Smith, had just returned from New York signing licensing deals with US retail outlets and setting up a New York office (there are also rumours of a West Coast office opening in the future).

Commenting on the attendance at the store, Smith said:

“I’m blown away by the turn-out which is many times larger than expected and it’s wonderful to see kids who play on-line experience Moshi Monsters in the real world, though retail is a lot more complicated than I originally thought”.

The store will be open for one week, over the half term school period, though if it remains popular Moshi may extend the opening for a while.

The jump from on-line to retail has been hard, but seeing the delight on children’s faces when they come into contact with life sized Moshi Monsters and the retail goods means that it’s worked and both the on-line and real world of Moshi Monsters are going to be huge.