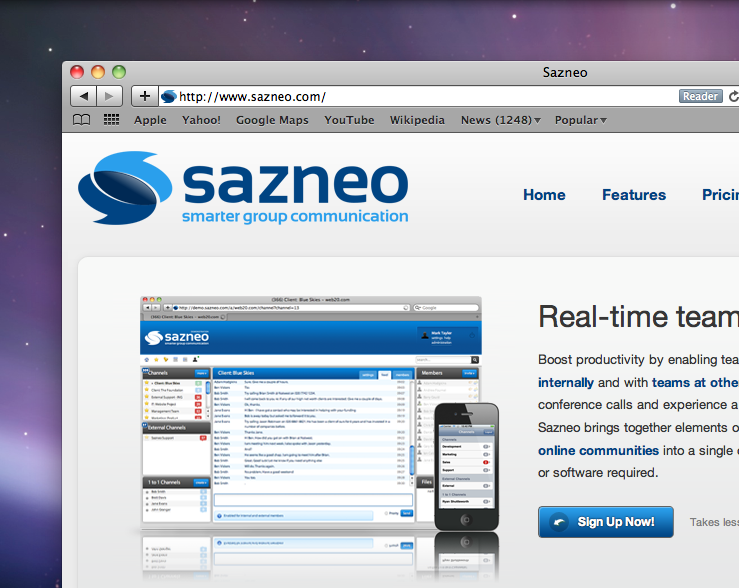 Online group collaboration tool Sazneo has announced its new iPhone-enabled web app, aimed at helping work teams communicate and stay connected no matter where they are.

We covered Sazneo last month and were impressed by its well thought-through solution for real-time communication in teams that would ensure communicating with others outside their main team very easily. At the time, we were disappointed at the lack of a Sazneo mobile app, but that seems set to change with the company’s new mobile push, the rolling out of Sazneo Mobile.

Sazneo Mobile is currently an iPhone-specific mobile web app that behaves just as it would as an iOS application and is accessible by simply visting http://my.sazneo.com.

Once a user’s credentials have been entered, the individual channels that the user is subscribed to in the desktop browser are immediately loaded within the iPhone’s Safari browser.

From here, conversations are loaded that have been discussed previously, allowing users to immediately get up to speed on important messages they may have missed from their co-workers. Chats appear quickly and image attachments are loaded within the stream, a simple click will display the file in a new browser window.

Due to browser restrictions, the Sazneo isn’t able to deliver push notifications, so a user won’t be alerted to new messages whilst they are on the move. However, Sazneo does automatically sync any unread messages which are sent whilst the user is offline, so that person can still remain updated, they just need to log on to see new messages.

The Sazneo web app is an immensely useful extension to this group collaboration platform and whilst they aren’t officially supported, both iPad and Android devices are able to render the Sazneo Mobile web website.

One way that we feel Sazneo could help mobile users is to send email notifications of messages sent to a user whilst they are offline. This would help bridge the gap between having push notifications and no notifications at all, giving users the ability to choose whether they need to open the web app again.

This of course could prove a little overwhelming if a conversation was particularly long, so it could be limited to a small notification that messages are waiting to be read.

If you have a large network of employees and need a simple and efficient way to communicate amongst them, Sazneo’s collaboration service is available for free with a maximum of five channels and 100MB of file storage. If that’s not quite enough for you, an unlimited number of channels and 500MB of file storage is available for $8 per user per month.

If you’re work as part of a remote team and find your current solution a little lacking, you really should give Sazneo a try.

Read next: Boom or Bust: Broadband and Social Media will save Dotcom 2.0