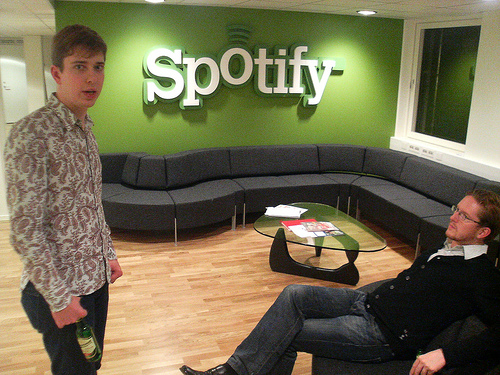 After failing to bring on three of the four major music labels for its own unlimited music service, Virgin Media is said to be in final talks with Spotify with the intention of launching a music service whilst it tries to prepare its own.

According to The Guardian, Virgin Media has already secured Universal Music for its service, some 16 months back, but failed to negotiate terms with EMI, Sony Music and Warner Music which are all thought to have issues with services offering an unlimited amount of downloads for a specific fee.

With these three companies blocking the deal, it is thought that it will take a further 12-18 month for Virgin Media to establish its own service so it has looked to other companies, namely Spotify, to partner with and offer a music service in the meantime.

A close source to Spotify told The Guardian:

Spotify and Virgin Media are close to concluding a partnership deal. The finer details are not yet known, but Spotify will be offering new tools and content exclusively to Virgin customers as part of the arrangement.

Spotigy did not comment on the deal specifically but did mention that it was in talks with “a range of internet service providers” however a deal was not in place “at this time”. Virgin Media were coy, stating:

“Virgin Media is forging new ground in music and whilst we are currently in talks with numerous parties, we want to ensure that any service provides a truly compelling offering for both consumers and industry.”

A Virgin Media deal would be a great boost for Spotify, which has already secured deals with some mobile carriers. With music piracy still a huge issue, Spotify is doing its best to provide a decent alternative for music lovers whilst keeping record labels happy.

Read next: London Tube travellers to get 48-hour loans of Samsung Galaxy Tab