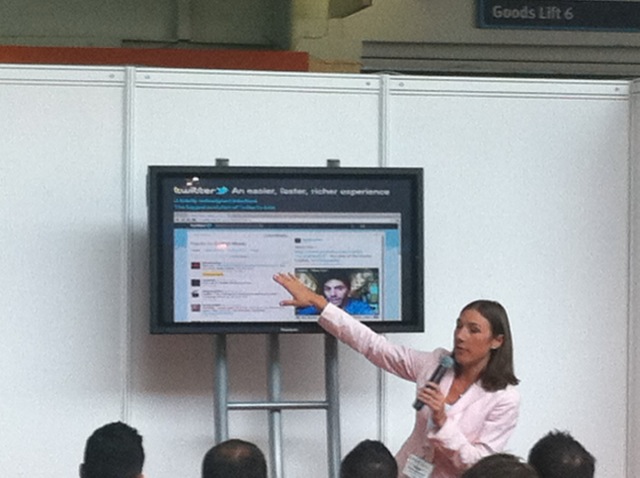 It was a timely and much welcomed visit, with the new interface going live (for some) on the 15th September, and its Promoted Tweets advertising platform inching forward to a worldwide roll out.

Weil was at the event to discuss the opportunities that Twitter presents advertisers and brands in the UK, as an information network, and as a advertising platform.

With the service handling up to 90 million tweets a day and 275 staff at the helm, it was clear from the visit to the UK there has been a reinvigorated shift to push the monitisation and engagement of the platform.

In a surprisingly small and subsequently overcrowded speaker area, Weil went through Twitter’s key plays on its advertising platform, or as it turns out, the 3 r’s.

Providing the ability to communicate highly targeted and subsequently penetrating messaging.   Weil also mentioned later in the presentation, that geo located targeting is on the roadmap, ‘ we’re working on it, but not available yet’ after a question from the audience. Something only matched by search queries and the subsequent intent from the user, the ability to target users with promoted tweets, in real time, exactly when users are talking about them.

In a similar way to how Facebook are starting to rank ad performance with social engagements, Twitter’s promoted tweets will be judged on just that, with retweets, favourites, replys and views which will surely develop into a ‘Quality Score’ esque ranking of tweets.

One of Weil’s first comments, was to cement Twitter’s stand point on how it should be defined, by confirming what Biz Stone and Evan Williams mentioned previously, ‘twitter is not a social network, but an information network’.

This is a clear stance to differentiate themselves from the competition, though surely it’s much more than that, with Weil working her way through a key guide to engaging in conversation with brands prospective and existing customers.

As we’ve already covered today, Twitter are building out its Analytics tools too, already available to current selected advertisers and will be available to all users by the end of the year according to WebTrends.  This piece of the jigsaw will ensure brands and advertisers have access to usable insights and performance indicators to build growth within the platform.

One of Twitters key focus should be on its real time targeting, especially when visiting a number of agencies and brands in the capital, as this clearly differentiates itself from Google and Facebook.  With search, the user intent is clear and defined which has been the driving force of growth seen over the last decade.

Facebook runs off profile information, but how up to date is yours? I for one have interests in there that I no longer actually have.  It definitely has a valuable position though, being able to drive interest in brands and promotions, with great targeting across am unmatched 500 million active user base globally (23.7m in UK).

Twitter fits nicely into the targeting niche of being able to target ads at the exact point when users are interested and discussing the topic, something that will is unique and will be crucial in the monetisation of Twitter in the coming years.

With Google, Facebook and Display AdExchanges painting a bright and effective landscape for advertising over the next few years, kudos to Twitter for identifying a targeting niche that’ll sit nicely along the aforementioned ad platforms.  Fail whales and worms depending of course.

Read next: Chirrps, the Twitter search utility, now lets you check in at your favorite websites