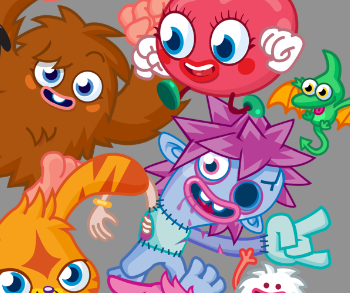 Moshi Monsters has until now been completely online, allowing kids to nuture their monster and build them a home. Though anyone can join (and around 1/3 of children in the UK between 6 and 12 have created a Moshi monster), they need to pay to unlock features of the site and to buy virtual goods. Though Mind Candy is very careful about the environment for children, one major flaw is that parents still need to supply credit card details in order to unlock the extra features.

Moshi went commercial in Jan 2009 and have been growing ever since (now they’re achieving 20% month on month growth). As of this Wednesday, they had 27 million players worldwide, with 32% in the US, 30% in the UK and the rest of the world accounting for 38%. Mind Candy says is is signing someone up every second of every day.

Mind Candy is launching a range of Moshi Monsters products in the real world to complement its on-line presence, though the first new product is still digital.

Moshi Mouth.Off: An iPhone app that allows the user to select one of six monsters. The app displays the mouth of the monster and when the user holds the iPhone in front of their face and talks, the monster lip-syncs. It’s being released on Sept 24th. Moshi Bandz: Moshi are joining the Silly Bandz craze which has taken the US by storm and releasing Moshi Bandz. There are 56 styles in 11 colours (when not worn, they form into the outline of a Moshi Monster). There will also be rare ‘silver bandz’ and even rarer ‘gold bandz’. They’ll be available on Oct 30th.

Moshi Gift Pack: These are being released on Nov 12th in US, UK and Australia and will cost £19.99 / $29.99 and contain a 3 month membership for the purchaser, a plush Moshi Monster toy, Moshi Bandz, postcards and stickers and the clever bit, “friendship cards” which buyers can give to their friends and they get 3 days free membership to the on-line Moshi world. Now your kids push Moshi to their friends. Also since these are available in retail outlets, credit cards aren’t required to purchase, so hard-earned pocket money can now go to Mind Candy directly.

Monstar: This is a Moshi Monster magazine which will be released towards the end of the year. It’s print-on-demand, so a user orders it online and it will be delivered to their door anywhere in the world.

Moshi Video Game: Another in-house development from Moshi expected to be available for Nintendo DS/3DS in Q4 2011, it will work stand-alone and online.

These products complement Mind Candy’s existing relationship with Penguin, who are set to publish a range of Moshi books. Most of the above products are being financed and developed in-house, but the rewards are potentially huge as the children’s market is massive.

Mind Candy is poised to become a big worldwide player, successfully winning both the online and retail markets with each feeding the other.

Read next: In Shock Move, Google Starts Advertising On Facebook