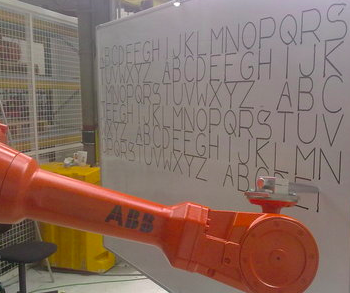 What we think may well be the first robot to use Twitter has set to work today, armed only with a drywipe pen and a whiteboard.

Twitter is home to lots of retweet bots that automatically repeat certain words or phrases (see our round-up here) but until now these ‘robots’ were just automated scripts. Scribblybot is different.

The work of software engineer Matt Thorne, this industrial robot arm has been set up to write out messages that are sent to it as Twitter DMs. It is writing the messages onto a whiteboard at the BMW Mini car plant in Oxford, UK in front of visitors at an open day today. Those who send a DM will apparently get sent a photo of their tweet written on the board in neat robo-handwriting.

While it might seem like a simple enough task for a robot to write a tweet, we’re sure that lots of complex work has gone on behind the scenes to bring Scribblybot to life. At Thorne says, “I know that this is a completely useless and redundant thing to spend time developing but it’s my way of bringing Twitter to real life!”.

The only problem is that we can’t give Scribblybot a test as he would need to be following us in order to send him a DM. Thus far he hasn’t reciprocated our plea for Twitter friendship. That said, he seems to be working – retweeting some of his scribblings onto Twitter.

Thorne promises more photos and a full writeup after today’s event, which runs from 10am to 4pm UK time. For now you can see some photos from Scribblybot’s development on Flickr.

Read next: Seven Important Social Media Trends For The Next Year