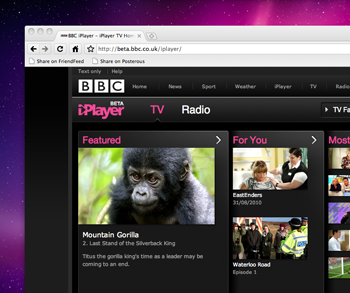 The new-look version of the BBC’s iPlayer TV and radio on demand service is set to go live early next week following a three-month beta period.

The new look site is a significant upgrade on the previous site, offering a sleek new design, personalisation features and integration with Facebook and Twitter to make sharing programmes easier.

In a blog post, the BBC’s James Hewines says that he hopes the new design is a step towards TV’s inevitable social future: “While social networks are now a well established phenomenon, socially enhanced TV and radio aren’t. It’s early days yet, but we’re pretty sure that this is going to be an important facility in the near future. Together, we hope these features represent a crucial evolutionary step in the enjoyment of online TV and radio.”

The BBC says that 75% of users of the beta iPlayer preferred it to the previous version and usage of the beta has recently been as high as 10% of the total iPlayer audience. Meanwhile 18,000 beta users linked up their Twitter and Facebook accounts to the servie while 70,000 users utilised another new feature to mak programmes as ‘favourites’. The most frequestly chosen favourite shows were Eastenders, Doctor Who, Top Gear, Mock the Week and Sherlock.

While the BBC appears to be cautious about setting a precise day for launch, in an email to The Next Web a BBC publicist said that Monday was the planned day. The new version is still available in beta here.