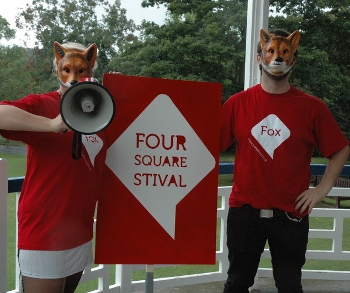 A few weeks ago we told you about a Foursquare ‘fuxhunt’ that was taking place in the English town of Cheltenham. Well, it happened last weekend and appears to be something of a success.

Wearing (we think) slightly creepy looking fox masks, competitors were presented with a series of clues that led them around local landmarks and shops. Checking in at each destination using Foursquare, the winners were the ones who managed to find the most locations.

Organisers Holly Knowlman and Andy Thorne were aiming to introduce more businesses in the town to the idea of promoting themselves via Foursquare and are now planning to expand the idea beyond Cheltenham “With the aim of involving larger organisations and developing the event’s commercial potential.”

With some people predicting Foursquare’s imminent demise (and, admittedly, others not), maybe the idea of a “Facebook Placestival” might be worth looking into – even if it is a more ridiculous name.

Here are some photos the team behind Foursquarestival sent us. You can find more at their Tumblr blog.

Read next: Inside a Social Media-savvy Government Department