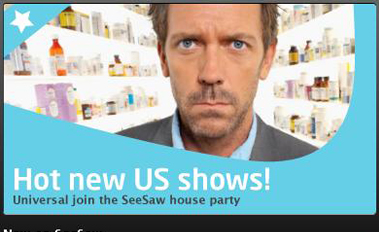 SeeSaw, the online TV catch up service featuring both paid for and free content, has signed a deal with NBC Universal to show an array of US hit TV shows at 99p a go.

The titles, which make up an impressive list include House, Heroes, 30 Rock, The Office (US Version), Battlestar Galactica, Lipstick Jungle, Monk and Law & Order.

The shows can be rented for 30 days, but much like the iTunes model, must be watched within a certain time frame after its first play, in SeeSaw’s case, 48 hours.

Full seasons can also be rented for an additional fee, with House coming in at £12.99 for 16 episodes.   Without the ability to download and port the content to iPhones, iPods and the like, the model could fall down in the shadow of competitors like iTunes but continuing to attract these types of deals could give it a key angle as a one stop shop for TV catch up.

SeeSaw, still in beta, was launched back in February 2010, originally offering just free programmes from the likes of BBC, Channel 4 and Five before launching paid offerings in recent months.

The deal with NBC Universal is definitely a positive step, as it offers a real differential from the major VoD players in the UK market such as BBC, Sky, ITV and C4. SeeSaw must continue to add premium content as well as promoting its free catch up service to give itself the best shot of achieving long term success.

Read next: Dell Thunder Prototypes Surface, Get The Preview Treatment