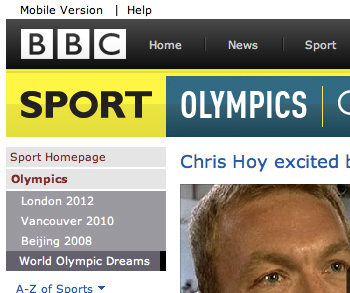 Update: See here for the BBC’s response to this story.

Well this is embarrassing for the BBC. The corporation’s new Olympics site has launched with a bit of (we assume) placeholder text left intact. (Update: The text has now been removed but you can see a screenshot below).

Inviting readers to become a member of a BBC Olympics Facebook page, the text reads “You can also become a saddo on Facebook”. Oops.

Strangely, the page doesn’t even link to a specific location on Facebook, just Facebook.com. The Media Blog (who spotted the faux pas) says the site launched only this weekend. This leads us to believe that either someone clicked ‘Publish’ a little ahead of time or there was a real lack of proofreading. Either way, it’s an embarrassing slip-up.