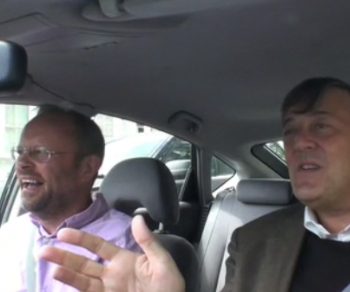 Here’s some inspiring news for anyone working on their own web TV show.

Carpool, the cult web video show in which actor Robert Llewellyn drives celebrities around while interviewing them, is to make the leap to TV.

The Guardian reports that UK TV station Dave has snapped up the rights to screen the show starring the man best known as angular-faced android Kryten in 90s BBC sci-fi sitcom Red Dwarf.

Dave will screen 10 episodes of the series which has become one of the most successful UK-based web series even before its TV deal. The TV channel says each episode of the show is viewed on average 50,000 times, while guests to date have included tech podcasting pioneer Leo Laporte, comedan Dave Gorman, Star Trek legend Sir Patrick Stewart and even the irrepressible Stephen Fry.

‘Giving a celebrity a lift’ is a simple format but one that clearly works. Llewllyn started the project 18 months ago and its relatively quick transition to TV is encouraging for anyone out there creating their own web-based shows on a shoestring budget.