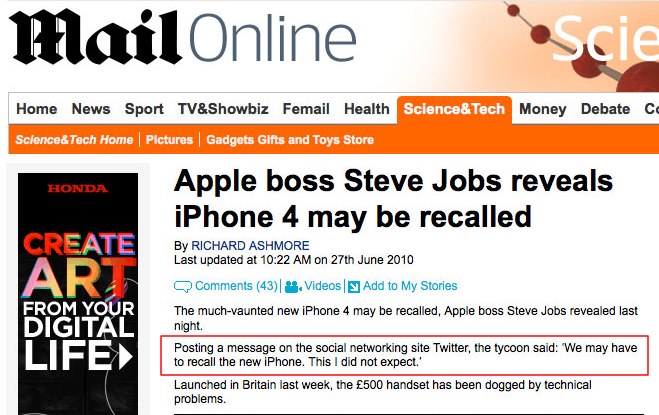 Above is a screenshot of the opening to an article in the UK’s DailyMail this morning (in case they pull it, which they have, here’s a full screenshot) claiming that Steve Jobs had confirmed an iPhone 4 recall was on the cards after issues with the phone’s antenna had surfaced.

Unfortunately Britain’s second biggest newspaper has egg on its face as the article quotes the notorious Fake Steve Jobs twitter account as the basis for the entire story.

It’s a hefty blunder from the UK’s most popular newspaper website and one that’s going to leave it with an embarrassing retraction to make, if it does in fact decide to make the retraction at all. Wonder whether the might of Apple will be in touch to have the story removed and force a retraction – Jobs made Ellen do it. (Update: the Daily Mail has removed the article, screenshot here)

Hey, at the very least the story has given twitter users a good Sunday morning giggle right? Can’t be all that bad.

Read next: Google's encrypted search gets its own domain