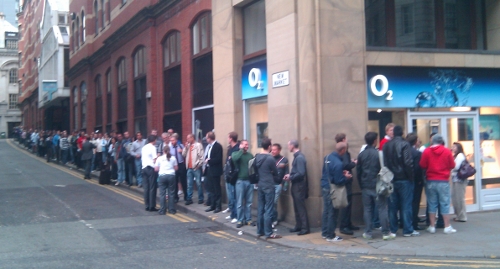 There’s no better way to visibly judge demand for a new Apple device than to check the queues on launch day. Looking at the numbers lined up around the UK today, the iPhone 4 is no exception.

In Manchester, we took a quick run around the city centre ten minutes before many shops were due to open to find out what demand was like.

O2 Stores saw huge demand, with around 120 people outside each of the branches we checked. O2 staff were handing out newspapers to those in line. Only a handful of people were waiting outside Carphone Warehouse stores (around 10 per branch).

We saw no-one at all waiting outside any of the other networks’ stores. Whether this was down to them having resvered stock only, we’re not sure.

It was unsurprisingly the Apple store that saw the highest demand. Around 60 people were queuing in the line for preorders, while the line for people chancing their arm at picking up an unreserved handset numbered… well, we lost count. Take a look at our shaky-cam video below to work it out for yourselves. Where the line starts facing the camera is where the preorders start.

Elsewhere in the UK, demand is reported to be high. The BBC’s Rory Cellan-Jones, for example, reports 100 queuing outside an O2 store in Cardiff and 40 outside a store in Farnborough.

UPDATE 2: Here’s our editor in chief, Zee’s view as he queues in central London.

UPDATE 3: The Next Web contributor Pedro Telles sent us these shots from Nottingham city centre at 11am – three hours after most shops started selling the phone.