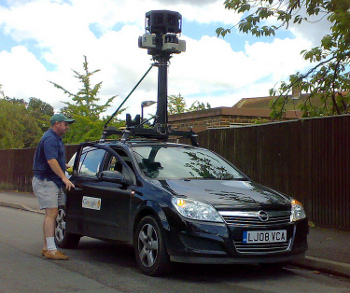 The storm over Google’s collection of private wifi data via its Street View cars shows no sign of calming. The UK police are the latest officials to begin an investigation.

Pressure group Privacy International announced today that it has complained about Google’s practices to London’s Metropolitan Police, leading to the force kicking off an investigation today.

Back in May, Google held its hands up to having inadvertently collected “fragments of payload data” from wifi networks its Street View cars had passed. This, the company said, was likely to be little more than fragments of data from Internet users’ online sessions but sue the the speed the cars move at it was unlikely that they would have been able to pick up solid data like passwords.

This has led to several countries taking action, including a multi-State legal threat in the USA. Worryingly, the BBC yesterday reported that French investigators found email passwords within the data they examined.

It’s worth noting that the UK investigation has been started by a privacy pressure group despite Google offering to delete the offending data. Privacy International asked for the data to be kept so that the police could begin their investigation.

As the group’s press release states:

“We hope that this difficult process will give Google pause for thought about how it conducts itself. Perhaps in future the company will rely less on PR spin and more on good governance and reliable product oversight”.

The Metropolitan Police will conduct an initial investigation, including interviewing Google staff in the UK, before deciding whether it believes a crime has been committed.

Read next: I can't get enough of this pet penguin in Japan...he has his own penguin backpack!!