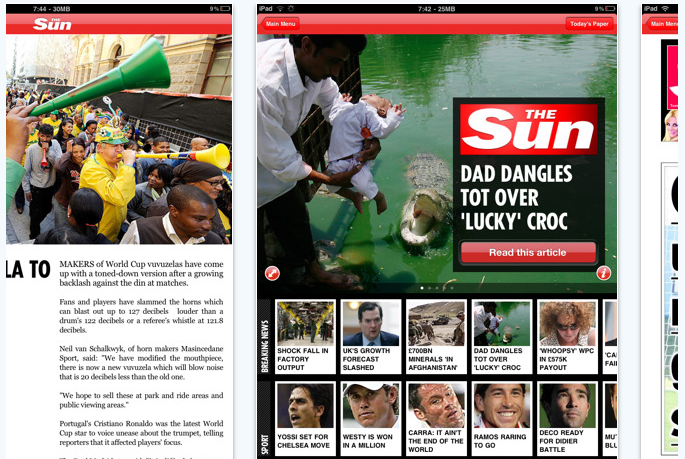 Newspapers are starting to make their way from print and onto Apple’s iPad tablet with The Sun the latest tabloid to launch on the iPad.

The app costs £4.99 a month using iOS’ recurring subscription which works out to about 20 pence per day, 10 pence lower than its printed counterpart. Once downloaded, the app allows users to consume content one of two ways – one is a digital copy of the print edition and the other is a more iPad friendly interface that allows the user to swipe between pages.

PaidContent has raised an interesting point – namely that The Sun has chosen to launch a paid app before it thinks about putting its website behind a paywall, something that News Corp. has already done with The Times (News Corp. also owns The Sun.)

Other sexually suggestive apps have been granted access to the App Store because they have real-world print editions that would be familiar to customers.

The Sun’s inclusion on the App Store could herald a new wave of apps containing nudity, utilizing age verification to stop children from downloading them.

The app features six editions a week and doesn’t include The Sun’s sister paper; The News of the World.

Have you had the chance to test it out? Let us know what you think in the comments.

Read next: Expect London Transport Apps To Get Better. Fast.